Home Campus Twitter Wants Punishment For Girl Who Got 2 Amity Students Beaten With... We all are aware that the Delhi and Noida region is filled with hot-heads who will harm another at the mere insolence of a person looking at them.

Parking fights are also something we are all familiar with, but somehow they usually have 2 people of the individual cars and it is settled almost as soon as it begins.

That was not the case with this fight over a parking spot that has now spread into a massive storm online where people are fighting for justice and #justiceforharsh & #justiceformadhav have been trending since morning now.

What Was The Issue?

As per reports, on Wednesday, 28th August 2019, an altercation happened on the Amity University, Noida campus.

The police had booked 4 students for reportedly badly beating two students of the same university over a parking issue.

Harsh Yadav, one of the people who were beaten up and severely injured in it said that he was simply parking his car outside the campus when the whole thing started.

Apparently while Harsh was trying to park his car, it was blocked by a female student. It led to Harsh and her getting into an argument through which Harsh and his friends ultimately decided to go to their class.

However, things escalated when the girl brought around 15-20 students (the number is not yet known) who first created a ruckus in the class itself and then attacked Harsh and his friends.

Reports have stated that an FIR was lodged by Harsh and Madhav against 4 students (Mayank, Shiv, Kunal and Chetan) who were identified for the assault under IPC sections 323 (punishment for voluntarily causing hurt), 147 (rioting), 504 (criminal intimidation) and 506 (intentional insult with intent to provoke breach of the peace).

On Instagram, the account @squadolive posted a video with an audio voice-over of Divaker Tyagi, who was allegedly a witness to the entire incident and even victim to the altercation.

The clip seems to give more details on what seems to have happened such as Saurav Pradhan and Harsh Yadav’s car being blocked by a white Endeavour SUV at Gate 3B of their university.

The boys had to get help from the guard who let them get their car inside the college premise. However, this was not taken well by the girls, as according to Divaker, they started to abuse and threaten them of bad consequences.

The girls and their friends then forcefully entered the boys classroom and started to vandalise chairs and create a commotion. However, it was when Harsh and Madhav Chaudhary went outside to look for the PCR van that the goons attacked them and left them severely hurt.

As per a social media post on Instagram the goons brought rods, sticks and more with which they mercilessly beat up the two boys. Another student was even hit with a steel chair and the teacher who was in the classroom Dr. Jyotika Tekchandani was hit and fractured her arm.

Harsh and Madhav were quickly transferred to a hospital where at the time of writing, Madhav was said to be in the ICU due to internal bleeding.

Harsh on the other hand has communicated with media and people on social media to get the story out. 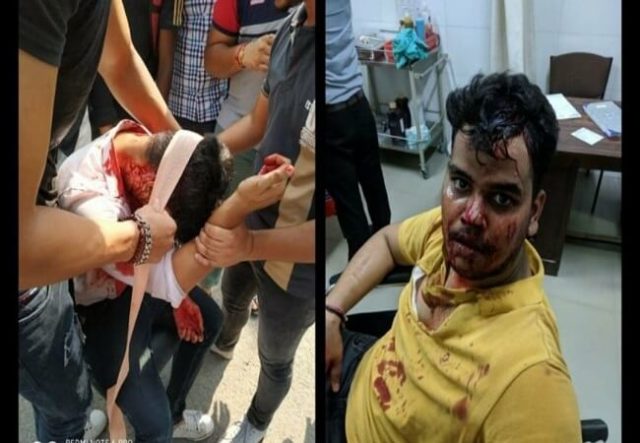 The Other Side Of The Story

There is another side to this story too where the girl in question allegedly accused the boys of molestation.

As per sources when Divaker Tyagi reached the police station to file a report they found that the girl had already filed an FIR against them.

She even posted a few social media posts showing her own supposed injuries and how she needed justice.

Read More: College Students In India Usually Don’t Know What They Are Rebelling For: Dangerous Trend On Rise?

Twitter has been abuzz with people furious with the incident and wanting the girl to be punished.

The #justiceforharsh & #justiceformadhav have been trending for quite some time now.

Absolutely horrifying case coming from Amity Noida where 2 girls not only got Harsh & Madhav beaten up brutally by a gang of 25-30 goons over a parking argument but filed false molestation case on them. One boy is in ICU. FYI @Uppolice @sspnoida @noidapolice #JusticeForMadhav pic.twitter.com/baEbMbTuyS

A student of Amity University Noida beaten up brutally by 25-30 goons called by two girls, he & his friend had argument with on road. He is in ICU right now. Girls have now booked a molestation case. PLEASE RT for help Harsh & Madhav#justiceformadhav #justiceforharsh pic.twitter.com/Vqv9VnKq0m

In the Amity Noida case, even if the girl had been molested she could have informed the authority, the way she handled the situation is totally unacceptable. One of the boy is in ICU.#justiceformadhav #justiceforharsh

gundaism in universities not a thing 2be taken lightly. Today, 25-30 goons have entered a classroom of a private university putting the victims in hospital. The police has also registered a harrasment complain against the victim. Where is justice? #JusticeForHarsh

Sick that @noidapolice @sspnoida @Uppolice has taken no action till now against those who brutally assaulted Madhav & Harsh. They instead booked a false molestation case against these boys. Here's what happened & why we all need to speak up for #justiceforharsh #justiceformadhav pic.twitter.com/RPsG0ngDcV

#justiceforharsh is trending !
Hope justice is served. Arrest them.
Another incident from Amity, threatening of fake molestation& Rape charges is very common there.
3 students were brutally thrashed by a group of around 25 for minor parking dispute which was excalated by 2 girls. pic.twitter.com/RaxFHsZbij

I am a Girl..but I Want the Rogue girls who uses their psedo #feminism on our Innocent brothers by falsely accusing them thus,ruining their lives !
& I heartily pray May Karma serve these Rogue girls as per their deeds Soon !
#justiceformadhav#justiceforharsh #JusticeForJesse pic.twitter.com/FflDn8m1SE

A mother's son is battling for his life in ICU because of a city girl's ego. Bhagwan kare iss ladki ka aur goons ka jeena haram hojaye. Even animals are better than you scums. #justiceforharsh #justiceformadhav pic.twitter.com/VF2L0B9hH2

It is definitely an important issue where ego and entitlement can be so harmful to other people.

Although police is still investigating and the girl has not yet been charged, this incident is a wake-up call.

What do you think about the whole issue? Who is at fault in all of this? Does the girl really deserve to be punished as severely as people online are demanding her to be?