Ever sat with a puzzle that’s so intriguing but so brain-wrecking that you end up spending most of the day on it? Well that’s how people who’ve tried to solve the Kryptos have been feeling for almost 30 years now.

Kryptos is a sculpture created by American artist Jim Sanborn. It stands on the grounds of the Central Intelligence Agency (CIA) in Langley, Virginia of USA.

Kryptos was installed in the year 1990, and despite efforts from a wide range of professionals and amateurs for almost 3 decades, only three out of the four encrypted messages have been decoded.

It is comprised of an S-shaped copper screen on which the codes are engraved, with other symbolic elements such as a piece of petrified wood, red and green granite, white quartz, and a pool of water surrounding it. 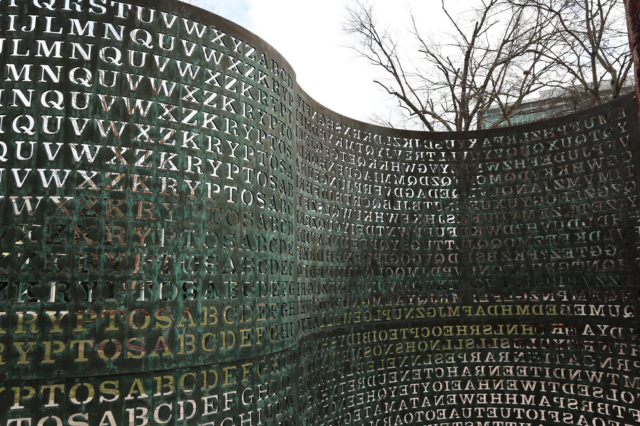 The sculpture contains 1735 alphabets cut into it, of which 97 characters belong to the final message that is yet to be cracked.

The CIA claims that Kryptos stands as a testament to cryptographic history. It contains a flipped version of a chart called ‘Vigeneries Tableaux’, that can be read only from the back of the sculpture.

Sanborn used this chart system in addition to matrix coding systems to encipher the first three messages. The fourth message apparently has been designed with so much caution that it still stands as one of the most puzzling mysteries in cryptography.

The first message is a short poetic phrase composed by the sculptor himself.

The second refers to something buried underground, and also contains coordinates to a location about 150 feet south east of the sculpture. 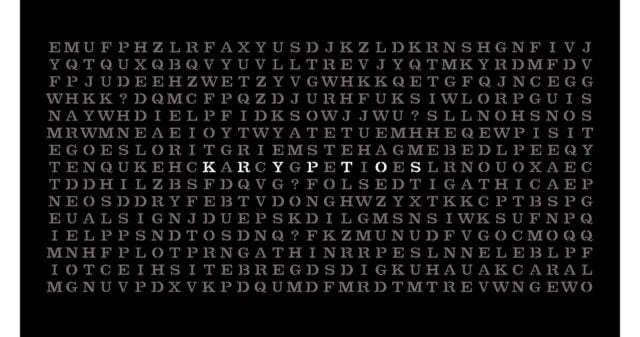 The third message is taken from the diary of archaeologist Howard Carter, describing the opening of Tutankhamun’s tomb in 1922. All these passages contain deliberate omissions and misspellings to preserve the aesthetic of the overall structure and to make the codes extremely difficult to crack.

These passages were solved within a few years after the sculpture was revealed. From computer scientists to highly qualified NSA employees, many people have been successful at deciphering these codes.

But none could taste the same luck with the fourth code!

Despite being just 97 characters long, the last and final message in Kryptos (aka K4), has given cryptanalysts several sleepless nights. They are still not able to understand how an artist, with no background whatsoever in codes created this unsolvable puzzle?

That is probably the most puzzling of all mysteries!

Also Read: Has The World’s Most Mysterious Book Finally Been Decoded?

Interestingly, Jim Sanborn, now in his seventies, gave two clues pertaining to the last puzzle because he was afraid that he may not live to see it being deciphered!

His clues, revealed consecutively in 2010 and in 2014, suggest that the message ends with the words, ‘BERLIN CLOCK.’

This is a likely reference to the famous public timepiece known as ‘Berlin-uhr,’ which by itself is a puzzle since the viewer has to calculate time based on a certain complex system.

Every year, a group of Kryptos enthusiasts meet with Jim at his Maryland studio, where they try to brainstorm and have discussions about the mystery puzzle. Their aim being to extract at least a speck of information from the artist – they lieterally keep watch of his every move as he speaks! 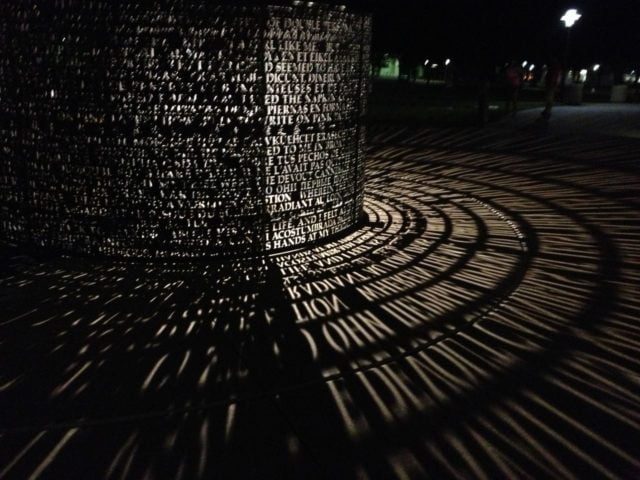 But Jim himself is quite stubborn about not divulging any of his secrets. Evidently, he was required by the CIA to submit the solutions in a sealed envelope, which he gave to former CIA Director, William Webster.

As a nod to this, he mentions him in the second message – ‘WHO KNOWS THE EXACT LOCATION? ONLY WW.’

Being who he is, Jim conned Webster also, for he later said that he never gave him the solution to K4, sending all hopes of coaxing the former director down the drains.

Well, for Jim, ‘Deception is everywhere.’ Maybe that’s the whole point of Kryptos – to remind us that after all, life is but a huge deception in the grand scheme of the universe. Philosophical much? Let us know in the comments below!