“Look at the sky. We are not alone. The whole universe is friendly to us and conspires only to give the best to those who dream and work.” —-Dr. APJ Abdul Kalam

It has been 66 years since India became independent. Yet the tag that reads “developing country” simply remains unaltered. Why is it that we, as Indians, inevitably tend to emulate those from the West? Why is it that we consider them to be above us when the Indian potential is far greater than anything the West can ever achieve? Why do we undermine ourselves and give in to the feeling of inferiority? In this article I shall detail the importance of these questions and how Dr. Kalam answered them in his own model for future India.

It is the remnants of British rule and the ashes of foreign policies and influences that have left us in an embarrassing race for development and a need for economic revolution. Of the many Indians who toiled for their country’s advancement, Dr. APJ Abdul Kalam was a truly remarkable activist. He answered many of the questions stated above. Being an idealist, thinker, scientist and nation builder, Dr. Kalam served the country in every way he could. He was awarded the Padma Bhushan in 1981 (the highest award that can be bestowed upon an Indian citizen). Popularly known as the Missile Man of India, he was part of many of India’s development ventures. This article, however, is not a detailing of his achievements. It is meant to share his vision in as condensed a form as possible.

In his book: “India 2020”, Dr. Kalam says; “A developed India by 2020, or even earlier, is not a dream. It need not be a mere vision in the minds of many Indians. It is a mission we can all take up – and succeed.” Dr. Kalam made it a goal to change the minds of the nations’ young population. He sternly believes that in these young minds lies the power to defeat corruption and reform the nation. Yet, there lies the more important query; what is the meaning of reformed India? Well, it certainly cannot be modeled on the United States or European countries simply because of three factors:

Dr. Kalam understood these problems. To find the answer, he looked into India’s past. He used the social ideas of ancient India, combined it with modern scientific progress and  gave it a finishing touch altogether his own to make the most beautiful and effective plan to reform the Nation. The following paragraph details Dr. Kalam’s plan for India and how we can strive to achieve it. 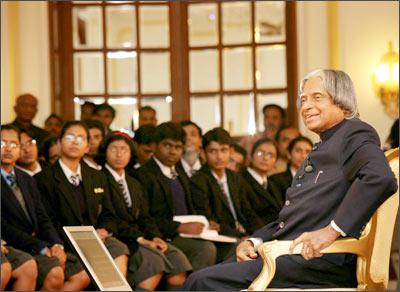 India is a nation of villages. Just as the biological cell is to the body, just as the atom is to every material existence around us, the village is to India. India’s villages can be looked upon as the basic building blocks of the country, unlike the USA, where cities are the representative units of the country. This is because of India’s amazing diversity. The only possible uniformity in problems exists only at the village level. Dr. Kalam felt the development of India lay in the development of villages. If each village was given the power to develop by itself and solve its own problems, India would grow at its unit-level thus ensuring all-round development. So how was this achievable? Education is the answer. Providing education to the masses and proper area-specific education systems modeled on Ancient methods. The building of the student-teacher relationship was the most essential part of this education system. Once everyone is educated, they will be able to develop their own local villages and choose the right leaders or better still, choose to become educated leaders themselves. The next step was to integrate groups of villages to an even bigger unit, interconnected by towns. These villages would be connected by efficient road systems and internet connectivity so that they could share their problems and the solutions that each one of them found. The towns would all be connected by the city. The city however would not become the centre for development and population concentration as it is now. Dr. Kalam suggested a 1:50 ratio of population distribution with only 2% of the population residing in cities. The cities would simply be coordinating and foreign trade related centres.

The final step would be to bring science, technology and moral value to each and every doorstep in the country. The improvement and ultra-modernization of agricultural methods are of crucial importance. This will all result from improving the education systems all over the country. Free and compulsory education should obviously be enforced.

Dr. Kalam also talked about modernization of the military and space departments of India. In his own words: “The possession of nuclear weapons does not necessarily mean we will use them to destroy. It is simply a tool to be used to ensure national peace and security. Strength respects strength. The nuclear weapons will be deterrents to war. After all, who in their right mind would wish to start a nuclear holocaust?” The economic system would also have to be reformed. The brain-drain to other countries need to be instantly ended and these resources must be used for boosting national economy.

The vision of Dr. Kalam is a truly brilliant one. Provided it works as it is meant to, we would certainly look upon a developed India in the future. All that is left is to put this plan into actions. Those of us who are privy to this information must work to make it an absolute success.