It has been almost a week, since the Murshidabad triple murder case took place, in which a family of three was found dead. Last Tuesday, Bandhuprakash Pal, a school teacher, his wife Beauty and their son Angan were found brutally murdered at their home.

Beauty was pregnant with a child during that time. Since this painful incident happened, BJP along with RSS has started claiming that Bandhuprakash Paul was an active RSS member and the murder case has serious political motives.

Despite the kin of the deceased having denied that the man who was killed had any political affiliation, the West Bengal BJP wing is leaving no stone unturned to prove it as a political murder.

A 35-year-old teacher Bandhuprakash Pal, his pregnant wife Beauty and their eight-year-old son Angan were found lying dead inside their house in Jiaganj area of West Bengal’s Murshidabad district on Tuesday when the Durga Pujo festivities were on.

On Saturday, police detained two persons in connection with the murders taking the number of detainees in the case to four, and a team of CID officials visited the crime spot.

The triple murder had acquired political overtones on Thursday with the West Bengal Governor Jagdeep Dhankhar, a senior BJP leader, hitting out at the Mamata Banerjee government over the killings while RSS kept on claiming that the teacher was their supporter.

Sarkar said he, however, rejected the man’s financial assistance and chose to mention that his brother-in-law was never associated with any political party.

“A person called me and said that he is calling from Kolkata. I don’t remember his name. At first, I thought he must be some teacher who said that he wanted to help Bandhuprakash financially. So I told him that he does not need any financial help,” Diptiman Sarkar told a media house.

“If at all you want to help, you can talk to Mamata about it. He agreed and said that he is a member of RSS. So I told him that I do not care about all these parties or the differences between the religious groups. I told him that if he wants to stay beside him just as a human, only then he is welcome. I rejected his financial contribution as well. I also told him that my brother-in-law was never associated with any political party,” he stated.

The deceased teacher’s mother also denied that her son had any kind of involvement with any political organisation like BJP or RSS.

Bandhuprakash’s mother Maya Pal said, “He was not an RSS party worker. He was not even associated with any political party. Rather he was busy with his academic activities, the rectification of voter cards and other documents at that time. He was not at all involved in any kind of political activity.”

Also Read: Hindus Will Get A Clean Chit In NRC, Said Amit Shah! But What About The Muslims?

Apart from the claims of the family members, the police investigation too is hinting that it was a case of personal enmity and has no political strings. According to the investigations, a diary note was found at the murder spot which suggested serious differences in the family.

But Sanjay Singh, ADG, North Bengal chose not to comment much regarding the issue as the investigation is still going on. 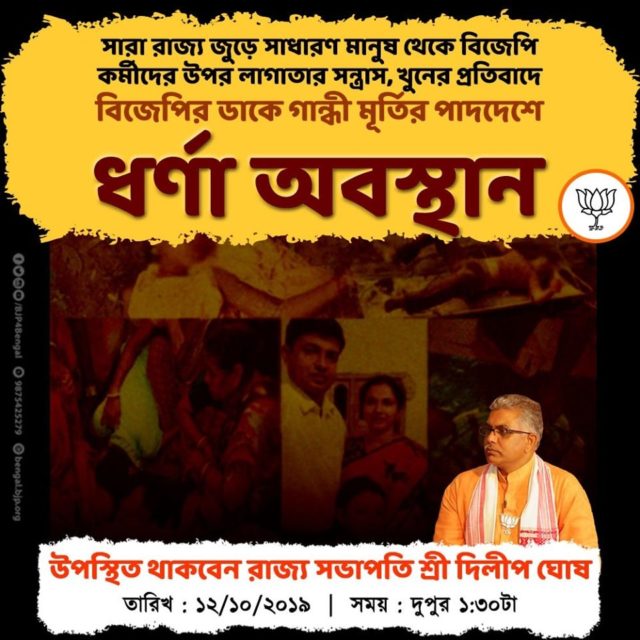 Why do you need dead bodies to play politics?

Still, Sanghis are not ready to keep calm and keep on posting random misleading information on social media to make people feel that a gentle BJP supporter is dead in West Bengal and no person is coming up to protest.

They even tried to give this murder a communal look primarily stating that Bandhuprakash and his family died because he protested against illegal construction of a local Masjid.

A complicated murder case has become more complicated because of interference by RSS and BJP and the latter’s continuous agitation is confusing the people of West Bengal.

In the last few days, the state has witnessed a lot of political turmoil and in this case, a political party is openly doing crazy politics with 3 dead bodies among whom the corpse of an eight years old is also present.

What is your opinion about this situation? Let us know in the comment box.