Home Lifestyle Anand Mahindra Was Inspired By The Story Of This Tea-Selling Couple In... Travelling is usually a young man’s game, something you do in your 20s or 30s, when you have the required stamina and energy to take risks and see all the beautiful sights you want to.

But there come stories that can break those stereotypes and make you realise that love of travelling is not restricted to age, and one such story even managed to impress the chairman of Mahindra Group.

Anand Mahindra, is the chairman of the company whose cars and travel company we are most familiar with, has been named among the ‘World’s 50 Greatest Leaders’ by Forbes and currently has a net worth estimating $1.7 billion.

He is known to tweet about inspirational stories and people on his official Twitter, but his tweet on 9th January 2019, about how a tea-selling couple from Kerala was achieving their dream to travel the world by selling tea, took over social media.

They may not figure in the Forbes Rich list but in my view, they are amongst the richest people in our country.Their wealth is their attitude to life. The next time I’m in their town I am definitely dropping by for tea & a tour of their exhibits.. pic.twitter.com/PPePvwtRQs

Who Is This Couple?

The couple, Vijayan and Mohana, have been selling tea at Sree Balaji Coffee House somewhere in the middle of Kochi since 1963 that Vijayan started in order to fund his and his wife’s dream of seeing the world.

In order to save costs, only the husband and wife work at the tea stall and as per Vijayan, make around Rs. 300 per day. The amount they save from not having any additional employees and with help of bank loans, the couple till date have been able to travel to 23 countries. 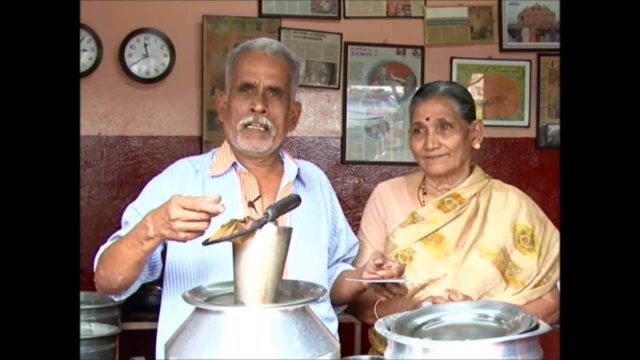 Once they return from their trips, they work non-stop, in order to pay off the loans they took.

The clip that Anand Mahindra used in his tweet was from a story by Drew Binksy, a travel blogger, who even revealed that it takes as much as 3 years to pay off the bank loans after each trip.

The couple that is now close to 70 years in age and been married for almost 45 years were also covered in a documentary film made by director Hari M Mohanan called Invisible Wings that won the Filmfare Award of the Best Film (Non-Fiction) in 2018.

Vijayan and Mohana have travelled to countries like Switzerland, Singapore, New York in America and more, and want to visit places like Denmark, Norway, Sweden, Netherlands etc next. 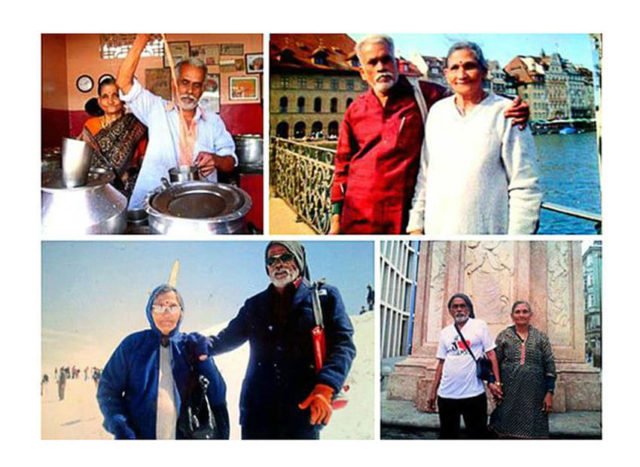 Not only Mahindra, but the couple’s inspiring story was previously noticed by superstar Amitabh Bachchan when he tweeted this:

Read More: Meet Aditi: A 23 Yr-Old With Down’s Syndrome Who Battled All Odds To Open Her Own Eating Joint

Funding Their Next Trip

In the subsequent tweets, Anand Mahindra then suggested funding their next trip on their anniversary when someone pointed out how the couple usually takes up big loans to sponsor their travels.

Well what about us finding out the date of their wedding anniversary and crowdsourcing the funding for their next trip as an anniversary gift?? https://t.co/gZescVgjQk

Not only this, but a sudden interest in the story of this couple rose up on social media with people applauding the couple for not giving up no matter what.

Look at this endearing story! It reinstates my beliefs in the power of purpose and raw instincts to chase your dreams. https://t.co/GGw0VtYqFo

Such a heart warming video that makes us realise what happiness n purposeful living is all about Yes @anandmahindra how delightful to gift them a ticket for their next holiday on their wedding anniversary. https://t.co/kBBpkucSUR

What a brilliant idea sir. Yes that would be great. I am in. https://t.co/BuEqxAGxne

Vijaya and Mohana’s story is SO inspiring. Watch this.. it would get a smile on your face and make you realise that you should Never give up on your dreams. I too shall visit them whenever I’m in their town. https://t.co/bUyMyJvDCP

@anandmahindra I am in. Let's send them to Scandinavia. My kind of couple goals. https://t.co/Hc8qHA1IKi

Absolute agree with @anandmahindra. This couple is the actual “Power couple” with the power to do whatever they want to achieve without anything coming their way ! https://t.co/DhfLjy08Hy

When someone questioned whether the couple would even accept such a generous gift in the first place, considering they are not ones to take any charity, Mahindra said this:

It is certainly an inspiring story of how to not let anything get in the way of your dreams.

Will you donate if a crowdfunding program is started to sponsor this couple’s next trip? Also what lesson have you learned from their story?

Tell us in the comments below.