Mohammed Aslam was a graphic designer at an IT company in Bangalore. His passion fueled his diligence and dedication at work and the company’s management was well aware of it. Therefore, at the age of 24, he was asked to supervise a young new hire in his team, Ms. Pooja Sharma.

Aslam and Pooja came from different cultures and religious backgrounds, but work was their common ground. They spent quality time together discussing work-related ideas, personal thoughts, and how they planned to grow with the company.

Work brought them together, but didn’t keep them close- because that was taken care of by the love they felt for each other. However, both of them knew they couldn’t be in a relationship, not publicly at least. Why? 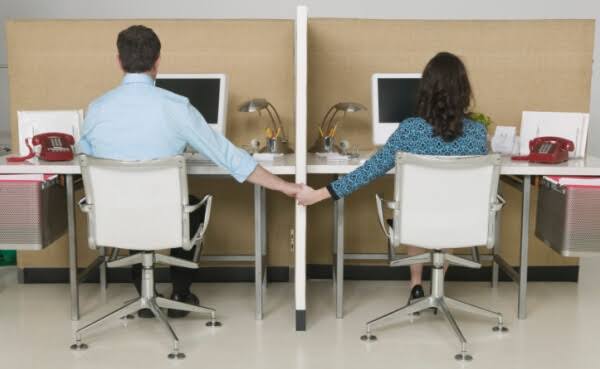 Before you look for a Hindu-Muslim angle here, let me tell you that what kept them apart is what made them cross paths in the first place- work.

According to their company policy, any romantic/sexual relationship between a supervisor and his/her employee, even if deemed to be a mutually consenting relationship, was considered a basic violation of professional ethics and responsibility.

Who said HR only designs annual trips and rangolis in a company?!

Why Workplace Is A Fertile Ground For Budding Romance?

People take out roughly 10-12 hours for their work, including the time for commuting. It’s a significant share of the total time they have in a day. Therefore, they hardly have any time to go out and socialize with others on a weekday.

The informal interaction during coffee and/or lunch breaks facilitates understanding between two people who may then go on to enjoy each other’s company.

Also, it is only natural sometimes to feel attracted to and have feelings for someone you meet and interact with regularly compared to someone you don’t get to see as often. 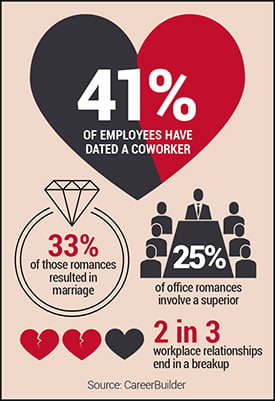 Another reason why people date their co-workers is the common professional background they share. If they work in the same team, department or company, odds are that they’d be perceptive about the challenges of the work, the organizational culture and the nature of circumstances that arise at their workplace.

This helps them relate better with each other and be a part of the highs and lows that the other person goes through professionally and personally.

Also Read: Jack Ma Predicts A 12-Hour Work Week Could Become The Norm In Future, Why I Don’t Want This To Be True

Why Romantic Relationships At Work Can Be Off-Limits?

Some companies prohibit a relationship between any two employees in a company, while others are specifically against a relationship where the two people are on different levels of hierarchy. The latter can become a liability for a company.

Romantic or sexual relationships between a supervisor and his/her supervised employee are prohibited when the supervisor has direct supervision of or any influence on the staff member’s evaluation or progress professionally.

In this case, co-workers can claim that an employee received preferential treatment from the employer/supervisor he or she is dating. However, this is a better situation to handle for a company than the one where a workplace romance sours.

It the relationship ends badly, irrespective of whether the relationship involved hierarchy or not, one of the employees can go legal against the other on grounds of sexual harassment and this drags the company into murky waters.

Therefore, some companies require their employees to sign a relationship contract, which states that the employees are in a consensual relationship at their own discretion.

How To Handle Romantic Relationships At Work?

First and foremost, you should be very clear about your company’s standpoint in this matter. So, carefully go through your employee handbook and make sure to understand the policy and what action the company will/could take if the policy is violated.

If you want to have a relationship with a colleague, it is critical that you’re discreet and professional about it at your workplace. You can’t let it slip, especially in front of your co-workers who become all the more vigilant in such a scenario.

A lot of people get into a relationship with a colleague at work, and it can prove to be fruitful for them in every way. However, trouble begins to brew when there is a fallout or break-up. In this case, it is difficult to see a former partner who is still a colleague. Worst case: he/she strikes up a romance with somebody else at work!

I feel romantic relationships at work are okay, only if you and your partner know how to handle it carefully and graciously, and if you’re ready for all possible outcomes. More importantly, never let your work get affected by anyone or anything.

With Monthly Income Plans Retire From Working, Not From Earning