Chandrayaan-1, the first Indian lunar mission, led the way in giving us evidence for water molecules on the Moon. This warranted more exploration on the lunar South Pole because it has large areas that are permanently shadowed and hence, the odds of finding water there are good.

Furthermore, this region of the Moon has cold traps whose fossil records can help us figure out the origin and evolution of the celestial body.

It consisted of a lunar orbiter, a lander, which is a spacecraft named after the founder of India’s space programme Vikram Sarabhai, and the Pragyan lunar rover, which is an AI-based exploration vehicle designed to move on the lunar surface.

It was launched on 22 July 2019. The soft landing of Vikram and the rover was scheduled to happen on 7 September 2019.

Unfortunately, the ground stations lost all communication with Vikram when it was 2.1 km away from the lunar surface in the early hours of Saturday.

The data is still being analysed.

Although ISRO Chairman K Sivan said on Sunday that the lander has now been located but since it missed the primary landing site during its descent, it must have been a hard landing.

What Is So Special About Chandrayaan-2?

The successful soft landing would’ve made India the 4th country to do so after the erstwhile USSR, the United States and China. Nevertheless, Chandrayaan-2 remains special because of the following reasons.

Also Read: Former NASA Scientist Was Asked To Write A Critical Article On ‘Vikram Lander’ From ISRO’s Chandrayaan-2 By Media

A Visual That Moved A Billion Hearts

Prime Minister Narendra Modi was at ISRO headquarters in Bengaluru at the expected time of the landing of Vikram. He not only lauded the whole team, but also assured them that he and the entire nation believes that ISRO will achieve what it set out to do in the future.

“We are proud of our space program. Today our resolve to touch the moon has grown even stronger. We came very close but we need to cover more ground in the time to come. We are full of confidence that when it comes to our space mission programme the best one is yet to come. There are several places to discover and go.”

K. Sivan was understandably dejected and deeply overwhelmed as he broke into an emotional outburst when PM Modi was about to depart. The Prime Minister hugged and comforted him till the time he gained composure. 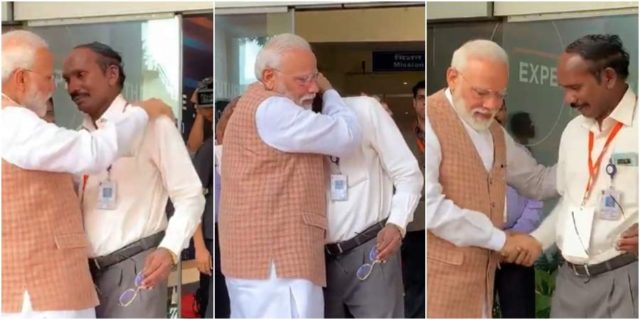 These visuals made every Indian emotional. People felt the ISRO chief’s pain and were touched by PM Modi’s empathy.

It was as though everyone’s heart went through the same beats and this brought the entire country together in solidarity.

Twitter saw tremendous support for ISRO. Political leaders and national celebrities joined the netizens in thanking the scientists for their commendably brave attempt and in turn, #ProudOfISRO trended on the social media platform.

According to the United States space agency NASA’s ‘Moon Fact Sheet’, only 60% of the lunar missions conducted in the last 60 years have been successful.

Majority of the countries are yet to carry out their lunar expeditions.

No wonder NASA said that it is inspired by ISRO’s efforts and wants to collaborate with it.

What is heartening is that 90%-95% of the objectives of Chandrayaan-2 have been fulfilled and it will definitely contribute to lunar discoveries, regardless of the loss of contact with the lander.

Also, the precise launch and overall mission management has ensured a long life of 7 years for the orbiter.

This is a mission that may not have had the desired ending, but the leap of faith it took makes me believe that even sky is not the limit.

It is truly a defining moment in India’s history because ISRO’s belief and hard work have not only filled us with pride as a nation and brought us together, but also inspired so many minds to never give up on their quests till they make the unimaginable possible.