Relationships are fragile, they are like a 100 year old item that can break if someone even breathes at it…

We’ve all come across such posts and more on social media these past few days in the wake of Liam Hemsworth and Miley Cyrus breaking up.

On 10th August the hearts of various people who were avid fans of the couple were broken when Cyrus’ spokesperson revealed of her split with her husband.

The statement read that,

“Liam and Miley have agreed to separate at this time. Ever-evolving, changing as partners and individuals, they have decided this is what’s best while they both focus on themselves and careers. They still remain dedicated parents to all of their animals they share while lovingly taking this time apart. Please respect their process and privacy.”

The couple had met in 2009 on the sets of their film The Last Song and had been on an on again off again relationship.

They finally reconciled in 2016 and eventually had a small secret wedding ceremony in December of 2018.

Barely 8 months after that, the couple has announced their divorce, with the news trending on social media most of the day.

Many people have not taken the news well and are majorly disappointed that a couple that they were so fond of has broken up.

Me after finding out Miley Cyrus and Liam Hemsworth are over: pic.twitter.com/mzxG7d4dJu

the relationship of liam hemsworth and miley cyrus pic.twitter.com/9ksvJfFQMX

Me signing onto Twitter and finding out #MileyCyrus and #LiamHemsworth split :( pic.twitter.com/y3haNmfZ59

Miley Cyrus and Liam Hemsworth have split up after less than an year of marriage….. guess true love doesn’t really exists pic.twitter.com/4Se3xTck3Y

Right when I was starting to believe in love again you’re telling me Liam Hemsworth and Miley Cyrus are divorcing the mf audacity I FEEL ROBBED OF MY FEELINGS. pic.twitter.com/Fm01LgttI4

You know I was so happy when Liam Hemsworth and Miley Cyrus overcame everything to finally end up together AND YOU TELLING ME THEY DIVORCE 6 MONTHS LATER? pic.twitter.com/4LpNoEMb5Z

However, this whole incident and the reaction that people gave made me wonder why exactly was this affecting millennials and the younger generation so strongly.

Affects The Way They Perceive Relationships

While many of us might roll our eyes and say we called it that their relationship would not work, it still affects the way we see relationships.

These are people that many youngsters and even slightly older people might look up to for lifestyle and relationship choices.

This constant flow of on again off again relationships, marriages breaking up within an year only and more can alter our perception of relationships and make us jaded.

And we are already seeing the result of this with the millennial generation marrying less, opting to not have children and basically having stretchy relationships.

Even for Indian millennials, 30 is no longer the deadline by which they must get settled. In fact, many are over 30 or well into their 40s and are in no rush to get married or “settle down” as the society expects.

According to research and observations from peer circles, the consensus I’ve gotten is that taking care of parents, having financial and social independence and autonomy are higher on the priority list of millennials.

As per a survey by OkCupid, a dating site, about 68% Indian millennials believe that in a serious relationship marriage is not necessary. The survey took information from around 86,000 Indians between the ages of 25 to 35.

With the marriage rate going down, the divorce rate is also subsequently declining.

This is not just in India but across the world, millennials are not getting married with a report by the Pew Research Center also observing that around 25% millennials might never get married ever. 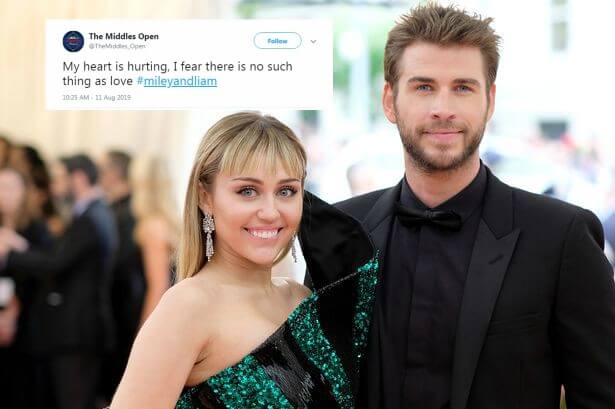 Read More: Why Millennials Are Largely Commitment Phobic And Choose To Postpone Marriage Vs. Advantages Of Marrying Young

No Clear Reason For Divorce

There is also a lot of speculation on why exactly Liam Hemsworth and Miley Cyrus broke-up.

Daily Mail, a tabloid in a report stated how a source close to the couple mentioned that “Their marriage is over and Liam is absolutely heartbroken, but Miley is making up for lost time.”

They also mentioned how Liam wanted a conventional family and to settle down but Miley was not ready for all that as yet.

As per the report the source said,

“She made it clear she wanted to be able to have fun with other people – men and women – but it’s always been something he’s had a hard time understanding.”

There is no proof if any of this is true and with the couple also remaining mum on the reason for the split it is difficult to understand.

Many people online have commented that the marriage was bound to fail and that the couple got married in the spirit of excitement without thinking it through.

What do you think? Why is the younger generation and millennials giving such a strong reaction to this news? Is it just a fan reaction or disillusion at the state of marriages around them?