Comedy as a genre has expanded and evolved greatly since the last decade.  A trending product of this expansion is stand-up comedy or the open mic culture.

Brought in from the west, the open mic culture has become widely popular amongst the Indian youth. And, the pioneer of this culture in India is unequivocally, Vir Das.

The Beginnings Of Stand-Up Comedy

Das, an Indian-American, introduced the open mic culture in 2003. He launched his own production company Wierdness Productions and an open mic, Ham-ateur nights with Vir Das.

This platform was used by many famous stand-up comedians prevalent today, to kick start their careers.

Das has also dabbled in Bollywood, and has starred in mainstream movies such as Delhi Belly and Go Goa Gone.

However, unlike YouTubers like Lily Singh and Bhuvan Bham, whose viral videos gained them popularity, Vir Das started from the lower rungs.

He started performing in comedy clubs and cafes, and went on to gain his notoriety as a stand-up comedian from there.

Nearly a decade later, Das has gained global recognition in the open mic culture with hits like Abroad Understanding and Losing It, both of which have been featured on Netflix.

Vir was born in Dehradun after which he spent 9 years in Lagos. He then went on to complete his schooling from Delhi. He also lived in Mumbai for a brief time period and pursued his higher studies from Knox College, Illinois in United States.

As a result, Vir’s background is multicultural. This is one of the reasons why his audience is largely Indian-American.

Moreover, his middle class upbringing is usually the butt of many jokes, and also the theme by which the majority of the audiences relate to him. Hence, his pop culture references are understood by a variety of audiences.

Das has a unique style of narration which makes him stand apart from the rest in his field. He is an individual with his own mind and isn’t afraid to express his opinions.

His fluidity of speech, candid nature, and unapologetic political banter is what draws audiences to him.

Moreover, having spent some years in the USA, like many others he has strongly expressed his discontent on the construction of the border wall, and the current visa and immigration policies.

He also made his disapproval clear with the current Indian political scenario. Voicing many people’s thoughts on the same, this was his recent post on Instagram: 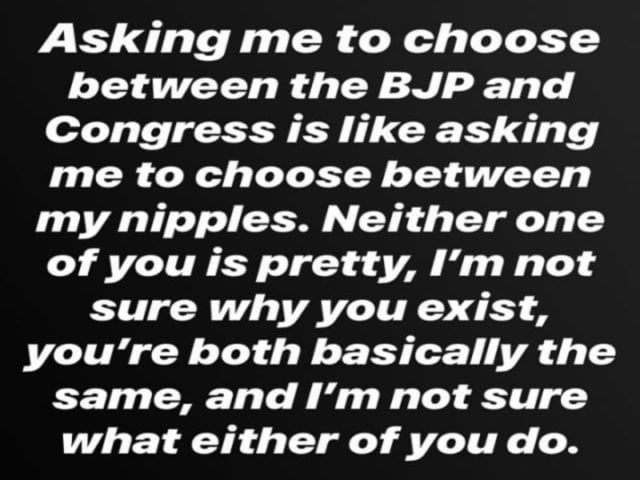 Vir’s sense of humour originates from his immediate surroundings, his love for his country, and normal human behavior. Besides that, the topics he speaks about are usually taboo subjects in India.

He has been accused of being vulgar during his sketches. However, according to me, it’s all part of the charm, along with his ability to humourise topics of contention without sugarcoating them. Such was his tirade on racism within India.

Vir artfully, but bluntly stated how racism functions within the society and how these differences within society should be acknowledged for everybody to be on the same page, and eliminate this disease altogether.

Vir’s successes speak for themselves. He is a trendsetter who has taken the industry by storm.

Soon, Vir is also going to grace Karan’s couch next episode along with Kirron Kher, Mallika Dua, and Malaika Arora.

In addition, he is also set to star in Whiskey Cavalier, an action-packed drama launched by ABC network. This shows just how far his influence has spread in the entertainment industry.

Vir Das & Gang: No, It’s NOT Okay To Score Less In 12th Board Exams, Let Me Tell You Why