The 4th episode of the 8th season of Game of Thrones is out and after the badass killing of the Night King in the last one, this one had its fair share of setbacks.

Where the last episode we all were celebrating and cheering for Arya and the end of the Night King, this time it was tears and sadness abound for different characters.

Whether you take the death of Rhaegal, Arya rejecting Gendry, Missande’s death, or how Ghost (the direwolf) was left ignored and without any petting by the very man he saved, Jon Snow.

However, it was Jaime Lannister leaving Winterfell for King’s Landing after sleeping with Brienne of Tarth that really left people broken.

The whole Jaime and Brienne thing had been hinted upon, their deep and beautiful friendship, one based on loyalty and trust, really changed around Jaime’s entire perception by the audience.

But it was in this episode that their romantic story was finally shown, alas it was not meant to be a happy ending, since news came out that Euron Greyjoy had killed one of the dragons, and that Cersei had taken Missandei prisoner.

Daenerys Targaryen and her army quickly left for the south and hearing this, Jaime promptly left for King’s Landing after an emotional goodbye with Brienne.

And interestingly I’ve been seeing a lot of hate and bashing of Jaime Lannister, ever since the episode aired.

JAIME LANNISTER YOU TRICK ASS BITCH HOW COULD YOU DO THAT TO BRIENNE THE SWEETHEART ILL NEVER TRUST YOUR SMELLY BUTT AGAIN ILL CUT OFF YOUR OTHER HAND FOR THIS #GameofThrones pic.twitter.com/VFGzRpWtTm

Jaime Lannister of the house trash

ive been rooting for jaime lannister for years and this is the thanks i get??? a killed development??? i- pic.twitter.com/qdNHoD3igE

However, I’m not really able to understand this complete 180 on Jaime especially after the character growth he has seen in the last few seasons.

Allow me to give a few reasons why this bashing of Jaime is not entirely correct:

#1. He Is Not Exactly Happy

A lot of fans are majorly concerned with Brienne being left after giving her virginity away.

But it feels like some are not willing to take into consideration that the decision to leave is not easy for Jaime either.

Sure, it all seemed a little too corny and teenaged drama style, with the guy being all rude to the girl before leaving and not really talking as we want, but oh well, it cannot be all perfect.

But it’s the dialogues that really need to be paid attention to, that could show how its not exactly the romantic love for Cersei that is making Jaime leave.

Before leaving he recounts all the horrible things he has done for Cersei, “I pushed a boy out of a tower that crippled him for life for Cersei” and ended it with “she’s hateful and so am I.” 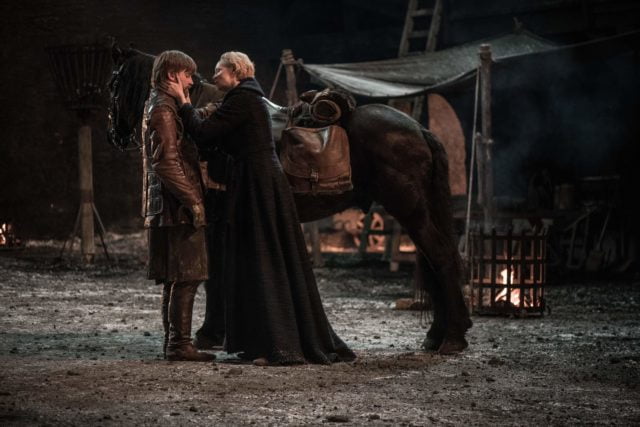 This bring me to my second point, that Jaime leaving for King’s Landing where the action is now shifting towards, makes perfect sense.

He came to Winterfell to support Brienne and the right cause, finally standing up against Cersei and doing the correct thing.

It was the moment of crisis, where the Nigh King and his army were going to be attacking Winterfell any moment.

But now that the crisis is averted for the time being and the focus has gone to King’s Landing, that is where Jaime needs to be, in order to complete his unfinished business.

Cersei is both Jamie’s lover and demon, and he needs to confront her and come other either way, as a survivor, or ending up dead. 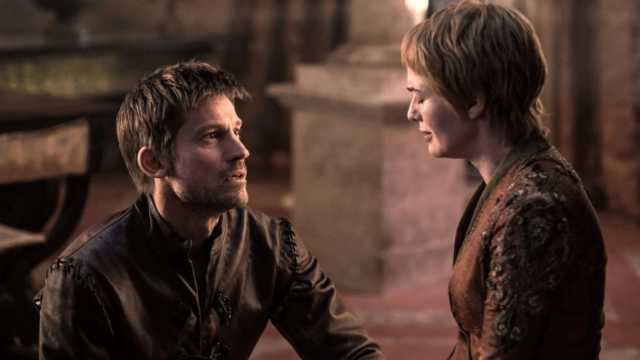 One cannot deny that Jaime and Cersei have the most twisted and painful relationship, where nothing good ever comes out of it.

Jaime has also always followed Cersei’s orders blindly, never questioning them. So now, at almost the end, Jaime has to finally go and confront the person who has always been his weakness and either end her or die trying.

Jamie’s journey till now as been big and changing every time, and this is the culmination of it all.

Read More: How To Save Yourself From Game Of Thrones Season 8 Spoilers Until You See It Later Today

Also Jaime is not exactly a stable guy to expect stable decisions from. His leaving in such a weird way makes sense, considering his character and how the guilt is finally eating him up.

Jaime only changed slightly after separating from his sister, being held captive by the Starks, and then the whole journey with Brienne, losing his hand, and his dignity and self-esteem and more.

But let’s not forget that he has done some pretty horrible things, pushing Bran off the tower, killing people, not stopping Cersei, and even raping her.

So it seems that for Jaime his end lies in King’s Landing, where either he will kill Cersei, or succumb to her once more.

Fortunately, it seems like not everyone is totally anti-Jaime and some are actually hoping that he’s just gone to finally put an end to Cersei.