If I start pointing out all that is wrong with Indian TV shows, it’ll take me a few hours of aggressive typing and I still won’t be done listing the flaws.

As a millennial, I deserve my fair share of popular culture that is representative of our society and how things actually work in today’s time, but alas, Indian TV shows are far from reality (and logic).

Ekta Kapoor started a trend a few years ago: valuing longevity over quality, and hence daily soaps were born.

Fast forward 15 years later, the costumes might be modernized, but what’s hidden underneath is the same recipe for disaster that the Indian audience continues to eat up without much protestation.

So let’s take up a few glaring issues one by one. 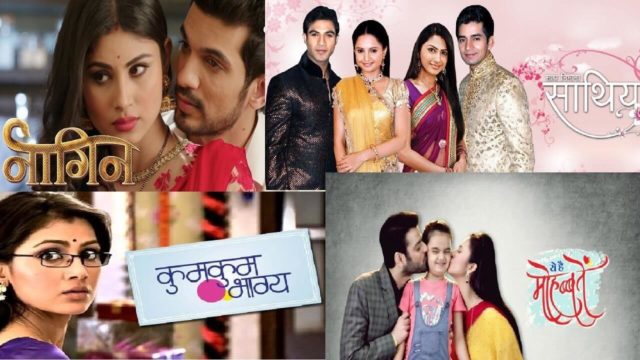 Firstly, all the shows mainly function on the same concept: saas-bahu drama and two reluctant people falling in love. No matter how different a TV show claims to be, this is what it ends up becoming after the first month of it airing.

Ekta Kapoor and her bandwagon of Indian TV show creators recycle the same dish and serve it to the audience, sprinkled with the bogus claim of ‘nayi soch’.

It doesn’t matter if the show started off as a political drama or if it was based around the social issues women in rural India face even in today’s date. In the end, it’s only going to be a love story.

Not in Tandem with Today’s Time

Indian TV shows are regressive, and unabashedly so. Their concepts of feminism and women empowerment are one-dimensional and fake.

Women empowerment isn’t just limited to female protagonists being able to dress freely. Most of these shows will showcase the male protagonist treating the lead female like his property. And to top it up, they actually romanticize it!

The modern Indian woman’s life goes way beyond kitchen politics and household chores. And no, a mother in law’s only purpose in life is not to make her ‘bahu’s’ life a living hell.

TV shows in other countries showcase an array of genres, from sitcom to drama to thriller to intelligent mysteries. The stories are thought provoking and intellectually challenging.

But in India it’s all about the make-up and how many times the heroine tears up in an episode. What’s lacking is the story.

In order to make sure that a show runs for a long time, TV makers introduce illogical and unnecessary twists to prolong the show’s run time. The quality of storytelling bears the brunt of this.

The plot isn’t well constructed enough to challenge the brain cells of a 7-year-old, let alone be good enough for a full-grown adult to spend time on.

If there are 20 daily soaps in all airing on a particular day, then all 20 of them will have the same, generic characters hidden under the faces of different actors.

The workaholic/businessman hero with an attitude problem, the do-gooder heroine whose life revolves around her family and her man. The ‘typical’ vamp whose only purpose in life is to get married to the hero.

What happened to variety in terms of character portrayal? And most importantly, how can all protagonists be picture perfect?

We know that human beings are largely flawed, but instead of depicting their flaws and how they contribute to different aspects in the story, what we’re given is idealism that is impossible to achieve.

The Indian audience is served mind-numbing stories with zero take-aways. The biggest peeve is that these shows are a complete misrepresentation of our society as it is today.

TV show stories could have a huge impact on progressing the Indian mindset and tuning people with the changing times.

But sadly, such a platform is wasted on telling Naagin stories. And no matter how many times TV actors compare Naagin with GOT, we all know it’s nowhere near that level.