Home Social Opinions Utsav Chakraborty Apologises For His Lewd Behaviour With Even More Sexist And... Yet another day has passed with another apology from another accused pervert.

Sorry seems to be the easiest word that can come up in the mind right now but there are people who try to create a shit-storm of self-serving apology instead of owning it up and taking full responsibility for the pain and trauma caused.

At a time when Hurricane Harvey has hit the Indian comedy circuit, the recent one being Utsav Chakraborty’s sexual misconduct with women, including minor girls, I have dissected the range of responses he tweeted through a long thread blaming illness, Snapchat and a Reddit thread for his outrageous behavior.

How About Being Sorry At Least For Once?

Oh, I am surprised with your part denial and part arrogance in accepting these allegations!!

Yesterday I accidentally fell off the road and was apologizing for having caused a scene.

I agree women apologize adequately enough but we could have at least expected an apology from Utsav but what he offered was a ridiculous rant using his auto-immune diseases to explain his toxic behavior.

Gaslighting To Prove Your Innocence?

Dear Utsav, painting yourself as a victim and not offering a single apology to the women sounds like a long tiring joke.

And just as a mere observation- the tactic that most of the men in such situations use to deflect responsibility is to question the victim’s reality in order to gain more power and sympathy.

While Utsav’s savvy deflection lacks empathy, he would rather victimize himself to the point where he would try to end with some emotional manipulation.

Dear Utsav, take your empty apologies and stuff it somewhere else coz we ain’t buying any of it.

You Can Also Read: With ‘Playboy Bunnies and Burlesque Dancers’, 1300 Kamla Pasand Employees Turn Cruise Into A Nightmare

Pretending To Be Woke By Advocating Feminism

Dear Utsav, you are just being sorry that you are caught.

But men are supposed to learn from women’s sufferings at such unprecedented encounters of sexual harassment.

And being an advocate for women doesn’t mean that you can be a serial harasser.

Even women suffer from such bouts of mental illness and it must be hard for you to fathom how we magically keep from abusing and harassing others?

Plus a woman giving consent to sex never suggests that her inbox is open either for perverseness or as a freeway to dominate her while she submits to sending parts of her body every time you casually talk to her.

Stop With Your Lame Excuses 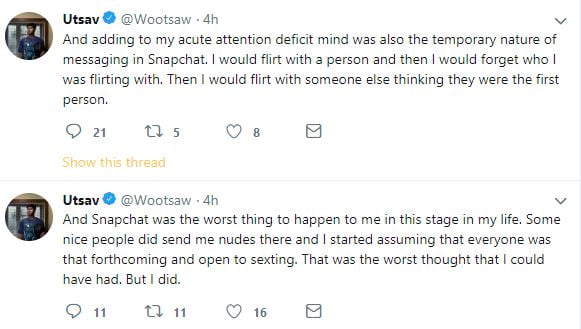 Dear Utsav, we are simply appalled by the arrogance that allowed you to continue your pathetic behavior with the belief that you would never need to stop it or admit it.

This sorry-but-not-sorry hedging will only encourage this repulsive behavior in the future and we certainly don’t need that.

Dear Utsav, interpreting your tweets may require a greater psychiatric experience but why should we care about your sickness at this moment which sounds more like the ramblings of a crazy drunk uncle at a family get-together?

It’s as straight as it can ever be- Consent is never straightforward when you are in power.