All of us now would be very familiar with the stodgy boundary related issues continuing in our country which are not yet solved. This Telangana issue has been going on since our Independence, and still there is no consensus on which our sturdy leaders could reach on. However, the issue was not much fired up till 2009 but it has managed to make its place in the discussions at the parliament, once again. There is nobody who can be accused, since the political leaders of that time vowed to safeguard the interests of the Telangana people, but at the end they couldn’t leading to more protests & violations by today’s leaders & public.

All this indicates that there is fragile unity among the people of India. Actually our country is a highly diverse nation so there are discrepancies on such matters. The Telengana movement gained momentum over decades becoming a widespread political demand of creating a new state from the Telangana region of Andhra Pradesh.

Telangana, situated on the Deccan Plateau, in the central stretch of the eastern seaboard of the Indian Peninsula may become the 29th state of Mother India. It comprises of 10 districts & the region is also drained by two major rivers, with about 79% of the Godavri River catchment area and about 69% of the Krishna River catchment area.

When India became independent in 1947, the Nizam of Hyderabad didn’t want to merge with Indian Union. Inspite of it, the Government of India annexed Hyderabad as a State on 17 September 1948. The Telugu speaking people were distributed in about 22 districts, 9 of them in the princely state of Hyderabad, 12 in the Madras Presidency, and one in French-controlled Yanam.

The Central Government appointed a civil servant, M.K Vellodi, as the First Chief Minister of Hyderabad State. He administered the state with the help of English educated bureaucrats from Madras State and Bombay State who had a unique sense of managing the place disliked by the Telanganites. So, owing to this there were violent agitations by some Telanganites to send back bureaucrats from Madras state.

Later, in December 1953, the States Reorganisation Commision (SRC) was appointed to recommend the re-organization of state boundaries. Leaders of public opinion in Andhra themselves seem to appreciate the unification of Telangana with Andhra. However, the people of Telangana had several concerns. Their region had a less-developed economy than Andhra, but had a larger revenue base which people of Telangana feared might be diverted for use in Andhra. There were many more fears related to the Krishna-Godavari basin in their minds. So, the commission proposed that the Telangana region be constituted as a separate state only.

Following the Gentlemen’s Agreement, the central government established a unified Andhra Pradesh on 1 November 1956. The agreement provided reassurances to Telangana in terms of power-sharing as well as distribution of expenses of various regions.

Twelve years after the formation of Andhra Pradesh, people of Telangana expressed dissatisfaction over how the agreements and guarantees were implemented. 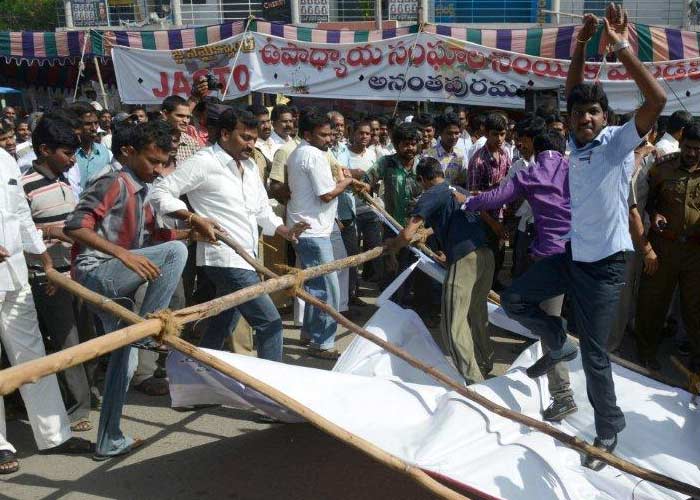 A new party called Telengana Rashtra Samithi (TRS), led by Kalvakuntla Chandrashekhar Rao (KCR), was formed with the single-point agenda of creating a separate Telangana state with Hyderabad as its capital. In December, 2009 the Government of India announced process of formation of Telangana state.

TRS president K. Chandrasekhar Rao appealed to Prime Minister Manmohan Singh to note that the people of Telangana were losing patience. He demanded that the Centre introduce the Bill on Telangana in the next session of Parliament.Owing to non-response by the center, a non-cooperation movement was started which lasted for 16 days with participation by 300,000 government employees. It caused a loss of Rs 8 billion per day in revenue to government.

In February and March, Assembly session was boycotted for weeks and Parliament session was disrupted for several days by Telangana representatives. In 2012, Sushilkumar Shinde, the newly appointed Home minister of India commented that the Telangana demand needs to be handled carefully since similarly carved smaller states saw increased Naxal problems.

On 30 July 2013, the ruling Congress party requested the Central government to take steps in accordance with the Constitution to form a separate state of Telangana (the 29th state of India). The city of Hyderabad would serve as the joint capital of Telangana and Andhra Pradesh for ten years.

Parliament will vote on the bill to create Telangana in the session beginning on February 5, the last before the national election, due by May. However, Andhra Pradesh Chief Minister Kiran Kumar Reddy is against this bill & has said he will quit politics if the bill that creates the state of Telangana is introduced in its current form in Parliament.

If the Telangana proposal is not cleared, Andhra Pradesh will be undivided for the national polls. That will rescue politicians like the Chief Minister who belong to the non-Telangana regions of Rayalaseema and Coastal Andhra, which will form the residuary state.