CNN News 18’s Rajeev Masand hosts a Bollywood Roundtable at the end of each year.

Masand strikes candid conversations with the stars about the year that went by. 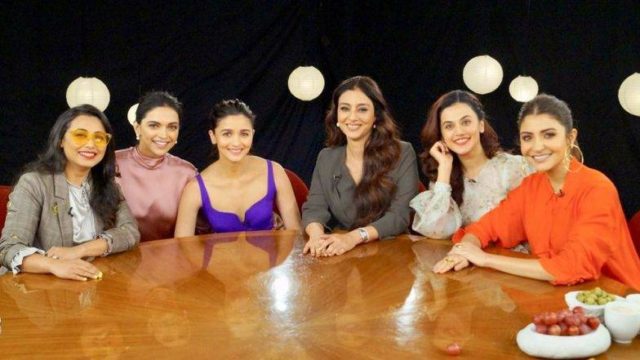 The discussion ranged on various issues right from women-centric roles in Indian cinema to the #metoo movement. All the ladies spoke their heart out but Rani Mukherjee’s appalling views on the movement gained quite some attention.

Masand questioned the actresses about what they thought of the movement and also shared views of Karan Johar and Ranveer Singh about the issue.

Anushka Sharma talked about the importance of creating a safe environment for women, “Workplace has to be the second safest place after your home.”

Alia Bhatt also spoke about how tough it was for women to come out and share their experiences which in a way is their contribution in making the future a safer place for others.

Also Read: Around 60% Indian Women Won’t Date A Guy Not Supporting The #MeToo Movement Or Feminism

Rani Mukherjee seemed to be on the wrong side entirely. It was appalling to see one of our favourite actresses go victim shaming. She kept on constantly blaming and questioning women about how could they not attack the predator at the very moment.

In Rani Mukherjee’s words, “As a woman you have to be that powerful within yourself to believe that if you ever come in a situation like that you have the courage to say back off.” 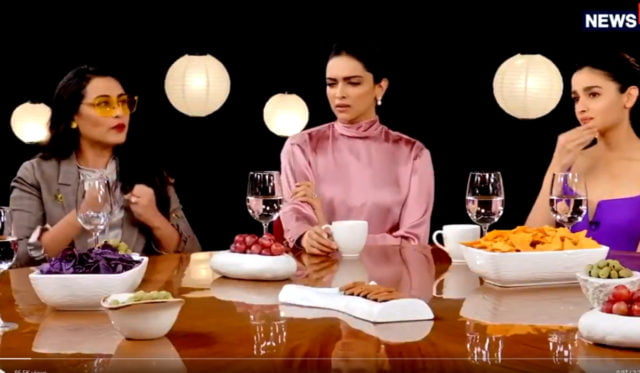 Deepika Padukone tried explaining the logical argument to Rani that not all women were structured in a manner to react or attack in the heat of the moment.

It was here when Rani Mukherjee lost all her logic and spoke mindlessly. She took to the platform and urged the women to change in order to prevent any of the abuse happening further.

Anushka and Deepika disagreed and tried explaining how it was simply letting the predator go loose instead of shaming the victim.

But it all seemed to fall on deaf ears and Rani was only propagating women taking responsibility for themselves. In fact, she went to the extent that she urged to make martial arts in schools compulsory.

It’s not a privilege to feel safe, it’s a goddamn right!

Deepika Padukone tried to budge in to talk about why martial arts was not the solution.

She tried explaining that the problem should not get to the scale of self-defence but instead stopped before that.

The environment should be healthy and safe enough for women to work or exist without being under constant fear of being attacked. But it just failed to change Rani’s views.

Rani Mukherjee went wrong on a whole lot of tangents. Being a mother to a young Adira, Rani failed to recognize the vulnerability a victim is experiencing and it cannot be judged at the same parameters for every woman.

Leave alone empathy, Rani did not even recognise the fact that it takes a lot for the victim to be out in the open about her experience. The victims have been ranging from young girls to older women and how would they punish the predator in the knack of the moment?

Tanushree Dutta, Vinta Nanda have spoken up after years, does that mean we should not recognise what they’ve gone through?

Is that the solution we want to suggest to a whole lot of safety issues women face in the country?

Resorting to techniques of self defence is again reassuring that victims who aren’t “strong” enough have to deal with harassment. It also continues to create a vicious cycle of creating the ideal masculine image of being strong and adhering to it in order to ensure your safety.

It’s just like saying that women should stop wearing short clothes in order to prevent rape.

Some Twitteratis were also seen blaming Rani’s regressive remarks on a generation gap. Well, it’s not about being older or younger, it’s simply about being progressive and rational.

We’ve all loved you for entertaining us all these years but please do not lose your hard earned respect due to these frightful opinions. You continue to inspire a generation, please do not break our hearts by sounding this insensitive.