A recent screening of Anand Patwardhan’s documentary film, ‘Ram Ke Naam’ in Ambedkar University Delhi (AUD) was disrupted by the Akhil Bharatiya Vidyarthi Parishad (ABVP). The situation reportedly escalated to a point that police had to interfere.

The 1992 film, which is based on the Vishva Hindu Parishad’s (VHP’s) campaign to build a Ram Mandir at the site of the Babri Masjid and the communal violence that followed, was screened by the Left-wing Students’ Federation of India (SFI).

They organised the screening in solidarity with the students of Hyderabad Central University (HCU), who were detained by the police for screening the movie in their campus.

Shortly thereafter, a group of ABVP members barged in shouting slogans citing that their Hindu sentiments were being hurt by this screening. Apparently, a lot of casteist remarks were thrown at the audience leading to a heated war of words between the two groups.

The screening was disrupted almost 8 times as the ABVP members tried everything from cutting the projector wires to even throwing tables and chairs on the door while the film was being played. Eventually, the organisers resorted to using a laptop and a Bluetooth speaker to finish the screening. 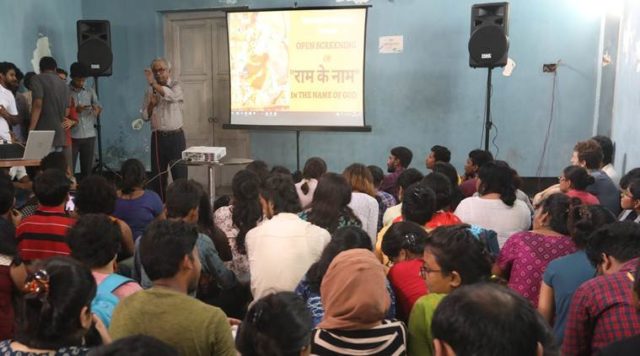 Also Read: Ramjas vs. ABVP Made Delhi University Wake Up To Life & Freedom: We LivED It!

The ABVP on the other hand claimed that their intention was to only “democratically protest the screening of the controversial movie.” They said that they wanted the screening to be postponed till the other group had ‘valid permission’ to do so. 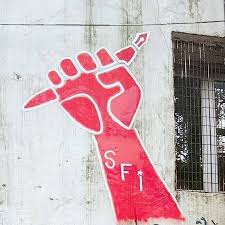 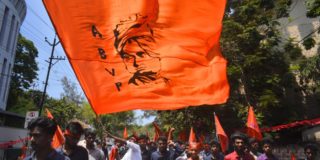 The ABVP’s concern revolved around the fact that the movie depicted Hindu communities like the Brahmins in a derogatory manner. They were even put off by the fact that the invite for the screening seemed to showcase nationalist groups like the RSS and VHP as terrorist organisations.

There were even allegations that this was a deliberate instigation from the part of the SFI in order to create a ‘Hindu phobic atmosphere’ in the campus. ABVP members said that they were threatened and assaulted by SFI members, who apparently had also stamped on pictures of Lord Ram.

How Does This Matter To Students?

There are many variations to the same story of instigation and over-the top reaction. While the SFI and ABVP accuse one another of violence and provocation, the Dean of Students, Mr. Santosh Singh said that there was no violence and that things were taken under control pretty quickly.

As a student myself, I believe that part of the experience of college is the fact that we get to express and intake a lot of opinions. In fact, student expression is an integral part of any educational establishment.

What we need to note is that the movie screening was to be followed up with an open discussion, which ultimately had to be called off. This would have meant that regardless of the kind of content the film portrays, there will be an array of perspectives put forth, making it a beneficial effort for all groups involved.

Not only that, while one group allegedly used force to protest, the other apparently resorted to instigation to garner attention for their cause.

We should also note that this is not an isolated incident. Just as how AUD and HCU faced troubles trying to screen the same movie, Kolkata’s Presidency College also had to go through similar circumstances.

Ultimately, the ones suffering by these incidents are the students who by no fault of their own, are subjected to unnecessary political arguments. Hopefully, this atmosphere will change for the best, keeping in mind the significance of freedom of expression and open debates.

Sources: The Indian Express, The Times Of India, edexLIVE