There are some events in India that till date incite a strong reaction due to how traumatic they were. The 2002 Gujarat riots was one of those incidents that makes its victims shudder with dread.

The riots that went from 3 days to 3 months in just Ahmedabad with Gujarat seeing violent outbreaks against the Muslim community for the next year remain a big mark on the democratic nature of India.

It was reported that the burning of the Godhra train in February 2002, in which around 58 Hindu pilgrims died along with many other people was the trigger for these riots.

However, the inter-communal violence that Gujarat saw in that period was much more devastating than anything with some reports stating the death toll to be around 1,926 and some saying it to be over 2,000. Officially it was said that after the end of the riots around 223 people were missing, 2,500 injured and 1,044 were dead.

Amongst all this though, 2 people gained nation-wide and global recognition as the face of the opposing sides of the riot.

Ashok Parmar, a Hindu and Qutubuddin Ansari, a Muslim became the faces of the 2002 Gujarat riots.

However, now almost 17 years later they have become dear friends so much so that one even came to inaugurate the other’s new shoe shop. 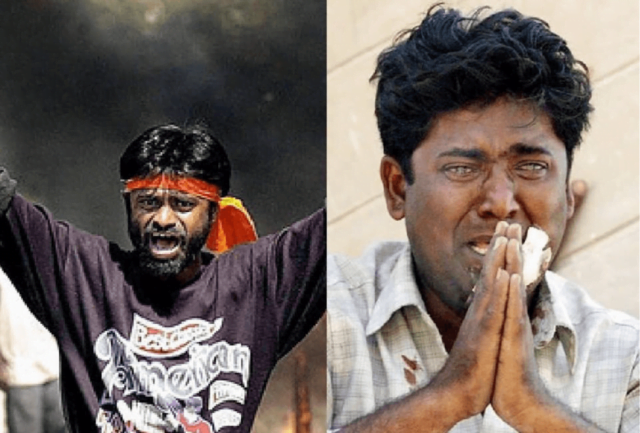 A Friendship Born Out Of Tragedy

The image of Parmar with a saffron headband and iron rod in his hand came to be known as the face of the Hindu side committing violence while Ansari’s photo with his hands folded and tears in his eyes represented the innocent Muslims being attacked. 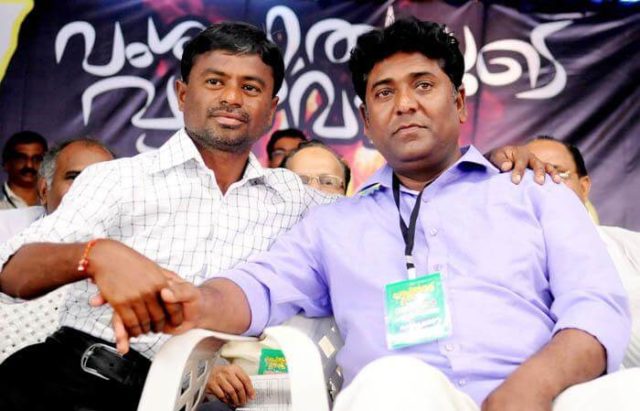 While it is unclear if the two ever had an encounter during the riots itself, reports have stated that the two first met at a 2012 programme around communal harmony organised by Kerala CPI (M).

In a report by The Quint, Parmar immediately apologised to Ansari when he met him there. Ansari commented that, “He felt terrible about the riots. He was full of guilt and remorse and said that such things should never happen in a country like ours.”

After that they kept in touch and would often meet each other. Parmar who was working as a cobbler at the time would get visits from Ansari at the streets he was working. Ansari and Parmar would then have tea and talk about their life.

Parmar on his part went to meet Ansari’s home and family in Rakhiyal, Ahmedabad during the festival season.

In fact, when Ashok Parmar opened his own shoe store ‘Ekta Chappal Ghar’ in the area of Dilli Darwaza, the inauguration was done by none other than his dear friend Qutubuddin Ansari.

Ansari even wished Parmar well on this new venture by saying, “You have started a new venture. Don’t be lethargic and work hard. Allah will provide for you.”

According to sources Ashok Parmar or Ashok Mochi as he is known, lost his parents and dropped out of school to takeover his father’s roadside business.

He has since worked as a cobbler, homeless and unmarried, and takes shelter in a nearby school at nights.

Recalling as to what really happened on that fateful day when his image was taken, Parmar was quoted by India Times explaining that,

“The girl I loved the most got married few days before the riots. I returned to work with a heavy heart that ill-fated day at around 10 am. There was a bandh that had affected thousands of daily wage workers like me. I lost my daily business and could not get any food. I was angry. Angry at my own situation and what was going on in the streets of the city in reaction to the Godhra incident that had occurred a day before.”

“Hindus were killing Muslims. I had beard which was making me look like a Muslim. I tied a saffron cloth round my forehead to save myself. Meanwhile, a photographer (Sebastian D’Souza from Mumbai Mirror) approached me asked me to pose like a rioter. I picked up an iron rod to show how angry I am. The next day I saw myself on the front page of almost all publications. Since then, I became a villain and face of Gujarat riots across the world. The photo landed me in jail for 14 days. Later, I was acquitted by a lower court because there was not a single bit of evidence to show my participation in the massacre.”

He has also cleared up that he was not part of the mob or the Bajrang Dal and didn’t think the picture would go as viral as it did. 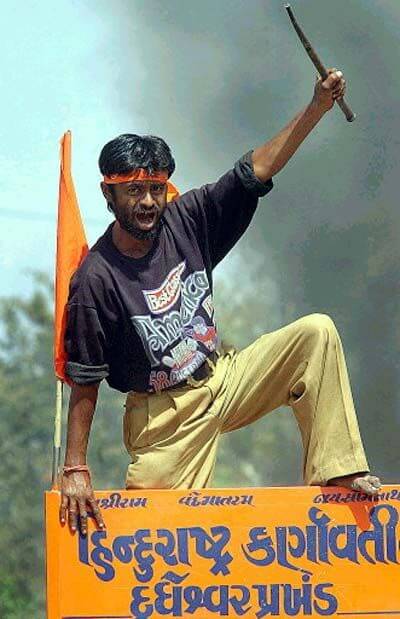 As per The Quint he said that, “Before the riots, I was a BJP supporter. I used to help with campaigning during elections. But, during the riots, the BJP and the VHP inflicted terrible atrocities on the Muslim community in the city, especially in Naroda Patiya and Gulberg Society – and that changed me.”

Since then he has tried to go ahead with his life and even participated in ways to bring equality to Dalit-Muslims when he joined the 10 day ‘Dalit Asmita Yatra’ in 2016. Although he later withdrew himself from the protest as he didn’t believe in the pledge.

Parmar finally got some help from the Communist Party of India (Marxist) of Kerala with which he was able to open his shop.

Even the name of the shop, ‘Ekta Chhappal Ghar’ is a tribute to equality. 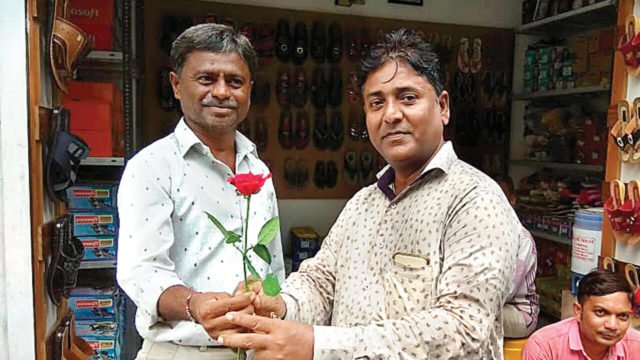 Read More: Why Has Lucknow Not Witnessed A Hindu-Muslim Riot In 100 Years Despite Mixed Population?

Qutubuddin Ansari now has a successful tailoring business in Ahmedabad with a wife and 2 children, however, the image has somehow always haunted him and been a cause of grief.

As per a BBC report, Ansari was not even aware that his photo had gotten so much attention when Arko Datta captured him in his lens.

For his part Ansari was just trying to get the attention of the Rapid Action Force (RAF) that was passing by his house. He told Mirror that, “The picture gave me life. I was saved because media was travelling with the RAF then and maybe the cops could not ignore and saved me. But it cost me everything else in my life. I lost my job and my mental peace. Fundamentalist Hindus spotted me and tried to target me. And now political parties try to use me and my picture without my consent.”

After the photo became popular, people would often come to him offering apologies or asking about his health and well-being. 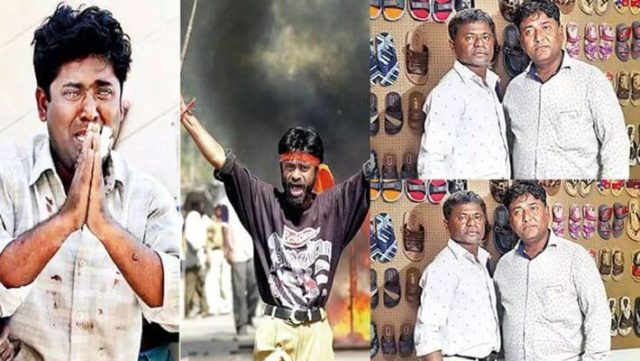 While this made him happy, but it was the unauthorised usage by political parties for propaganda that left him with a heavy burden.

He also lost about half a dozen jobs since people would recognise him and journalists tried to reach him. His bosses not wanting any trouble would have to let go of him.

As per a report he was quoted saying, “I am 43 and in the past 14 years, I have been “used and misused” by political parties, Bollywood and even terror outfits. I wish I had died in 2002 because I am not able to answer my children when they ask me “Papa, every time we see your picture, why are you crying and begging?”

Some people even accused him of taking money for his picture. Ansari, tired of his picture being used, wants to put it all behind him.

Today both Parmar and Ansari have left behind the tragedy and enjoy their friendship with each other.

While Ansari inaugurated Parmar’s shop on September 7th, the latter launched Ansari’s biography when it was translated into Malayalam.