Home Lifestyle Mythologist And Author Devdutt Pattanaik Comes Out As ‘Gay’ In Interview For... The abolishing of the unfair and regressive Section 377, that criminalised same-sex relations, has definitely brought about a new wave in the country.

The latest one being how popular mythologist and author Devdutt Pattanaik has for the first time, acknowledged himself as ‘gay’ or homosexual in a recent interview with CNN News18.

While in conversation with Anuradha Sengupta, the show titled Off Centre, Pattnaik spoke about various different topics, like how homosexuality is already so ingrained in Indian myths and tradition, to finally coming out for the country as a homosexual for the first time on television.

Pattanaik is renowned across India for his books that take a look at our deep and rich Indian mythology but the twist is how he brings forward some lesser known stories and how inclusive and diverse it really is. 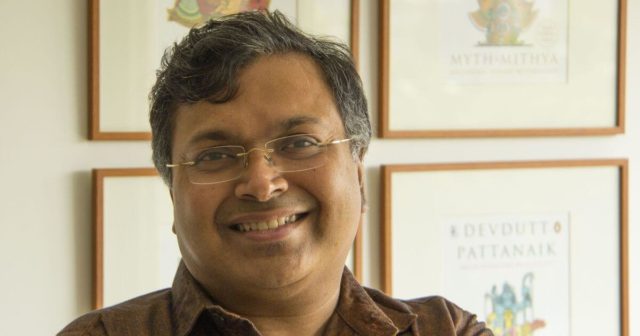 Devdutt Pattanaik Out Of The Proverbial Closet

Talking to Sengupta, Pattanaik, finally admitted on television, that he had come to the realisation of his sexuality at a very young age.

In the interview, he explained how he realised that he was gay, “I was in 10th standard, when I saw Jewel on the Crown movie… I heard the word homosexual.. and I looked up the dictionary and knew that’s what I am.”

Pattanaik commented on how while he never had any issues with being gay, he was aware that other people in the society hold prejudices and judgements against people who do not conform to the norm.

It was this knowledge that made him keep his sexuality hidden from the public, and that it was because he ever felt guilty. Pattanaik even went on to say that, people guessing his actual sexuality was something he quite enjoyed.

Pattanaik in the interview also revealed that his way of coming out to his family was to leave copies of Bombay Dost at various places in his home, but unfortunately, his parents were clueless about it.

It was only when he turned 30 and his parents were after him to get married and settle down that he eventually told him the truth outright that he was gay and will not be getting married.

His aim with finally coming out and sharing his stories was to show how badly the prejudices that people hold against the LGBTQ community can affect the members of it and that the larger society should think better.

The reaction to his coming out was met with joy and happiness by people on the social media.

Read More: Maa Ka Ladla Is No Longer Bigda Hua: This And Other Jokes That Are Dead With Section 377 Abolished

Has Been A Vocal Advocate For A Long Time

Being a fan of Pattanaik and his works, I have to say that one of his biggest plus points would be how casually and matter-of-fact way he writes the stories from our Indian mythology and tradition which prove how homosexuality and various kinds of sexualities and relationships were openly accepted.

Devdutt Pattanaik with his books has been a long time advocate for the LGBTQ community and even commented when Section 377 was finally decriminalised.

“I think for many people it will be life as usual. But for many people, it will be acceptance at state level. And you can talk to your families. Corporations will hopefully change their laws. You’ll be able to openly come out as gay. And you will not get into forced marriages where you ruin not just one life, but lives of two people. You know imagine a gay person marrying a non-gay person. That’s just not right. It ruins young people’s lives.”

In another interview with Times of India, before Section 377 was abolished, he commented on the anger and shame he feels that his country still had such a bigoted law. It is further enhanced when he is representing India on international platforms. He said that,

“Section 377 makes me feel ashamed that my country’s constitution allows such a primitive Victorian law, especially when I am representing India at global platforms. If repealed, then it will get easier for me to chat about my sexuality beyond just friend circles. I hope it also creates more legitimate public spaces for queer people in cities and villages of India. The validation of law is an important element for removing prejudice from the minds of people, especially friends and family members. Also, with 377 repealed, corporations can more fearlessly extend protections and benefits to their LGBTQ employees and create a friendly work environment for our youth.”

Catholic Bishop’s Conference Of India Says Homosexuality Is Morally Unacceptable, Needs To Be Treated At A Psychological Level, Does Not Contribute To Human Race