There are times when you feel that perhaps the country is moving towards a more progressive and forward thinking path, but then incidents like these come up to remind us of the reality.

The kind of hatred and trolling that Aniket Mitra, a Mumbai-based artist’s work has gotten in less than a day is truly astonishing to see.

Mitra, on his Facebook yesterday, shared an artwork, related to the upcoming Durga Puja festival, of a bloodied sanitary pad where the blood was used to create a lotus flower’s shape and the background had a ‘chalchitro’ said to be a decorative piece of Goddess Durga that is used behind the goddess herself.

However, in less than 24 hours, he had to take down the post because apparently some people must have reported it and complained against it for hurting religious sentiments. 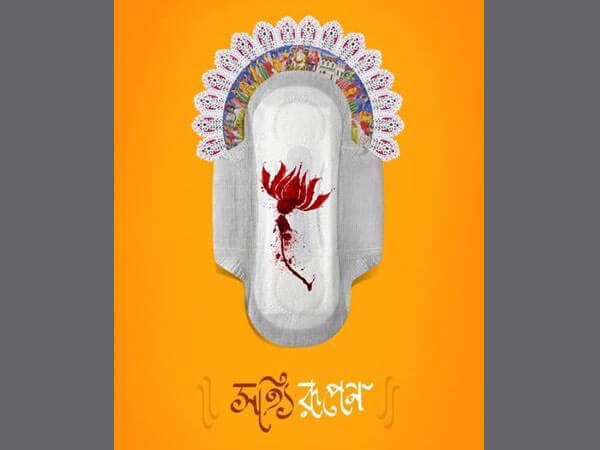 Why This Art-piece Was Created?

Aniket Mitra, who is a graphic artist and has also worked in the Hindi film industry, posted sometime around yesterday on 3rd October, an artwork that showed a bloodied lotus on a sanitary pad with the Goddess Durga’s adornment in the background.

The purpose behind the piece was to talk about the exclusion of menstruating women from Durga Puja pandals and how they cannot perform the rituals if they are on their period.

The post, however, went viral like crazy and just before it was taken down it had some 4000 shares.

Mitra told News18 how watching women from his family, being kept away from the festivities really hurt him. He said that, “I have watched first my sisters and now my wife struggle with taboos regarding their periods. I have seen them be asked to not come to certain places because they are menstruating. As someone living in 2018, this infuriates me.”

As told to InUth, he further explained that, “My artwork is just a reflection of what I had seen and experienced in everyday life. My wife loves the Ashtami anjali (a ritual on the eighth day of Durga Puja), but whenever she gets her period on Ashtami, she cannot participate in something she loves. There’s no such restriction for men so my artwork was an attempt at understanding how infuriating it can be for all women.”

Menstruating women are not only kept away from the pandals, but they also cannot participate in puja, eat bhog, kept away from the alters and are not allowed to touch the ‘puja samagri’. They cannot even look at Goddess Durga idols that are created in creative and unique manners for each pandal.

Along with this discrimination, Mitra also wanted to highlight the bad situation of female hygiene and how the organisers were not paying any attention to it.

He stated that, “Every year, the state government spends a lot of money during Puja. Committee also raise a lot of money for their respective pandals. Everyone knows that women are going to be out on the streets. Yet no one ever tries to get vending machines that dispense cheap sanitary pads in pandals. No one tries to get clean bathrooms for women.”

But unfortunately, the post had to be taken down because of hate and constant trolling where several people got angry as to how the artist could put the ‘impure blood’ of menstruation and their Goddess in the same picture.

He was also as per reports, branded as ‘anti-Hindu’, ‘anti-national’ and showing insensitivity towards the Indian culture and religion.

One of the weirdest things perhaps was how Mitra was accused of daring to show or insinuate that the Goddess Durga could also menstruate like any other woman.

Regarding this kind of double standard mindset, he said that, “Isn’t it hypocritical that we treat Ma Durga as our daughter, but we can’t accept a natural process that all daughters go through? Who are we really shielding when we become so angry about talking about gods and menstruation. Celebrating the menstrual cycle of a goddess at the Kamakhya Temple every year is convenient, but this is not?”

One person who commented on Mitra’s post said that, “If this was south India, people would have already chopped off his hands. We Bengalis are extremely tolerant but this is an insult to our Maa Durga and we won’t tolerate it.”

Alongside that, some of the trolls as per Mitra, also found out about his brother, wife, and other family members and harassed them too. There is even news of how there might be an official police complaint filed against him.

On this matter though, Aniket Mitra said that, “I hear there is even an attempt to lodge a complaint against me. But I have faith in Kolkata Police. Don’t think they would respond to such a baseless complaint.” 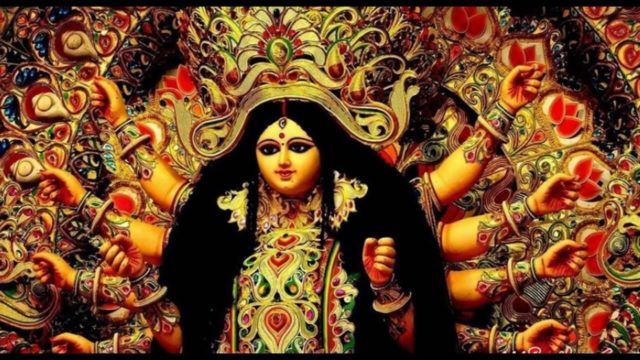 But Many Support It Too

While there are many who are against this art, including women, there are also those who are supporting this bold stand to finally do away with a regressive practice.

For those who are upset over the fact that their period cycle is going to ruin Durga Pujo this year, a sincere advice to…

Mitra has not lost hope and still stands by his initial message, and to clarify his position he has stated that, “People have even threatened me and tried to blame for trying to gain publicity with my artwork. That was not my intention. I just wanted to start a discourse on normalising periods. I just had faith that if we can celebrate movies like Pad Man, then what’s the problem in openly talking about it? But we’re clearly not ready for it.”

FlippED: Should Menstruation Be Celebrated? Our Bloggers Fight It Out!