Dissent or protest comes with a price- there is a danger of persecution, split relationships and even death at such times.

But is there any way to correct the society covering up the sordid truth that people encounter in daily lives without dissent?

Nandita Das’s Manto weaves the greatness of Saddat Hassan Manto’s words that strike utter relevance even in the present by cutting deep through the freedom of expression and the Hindu-Muslim unity by providing a mirror through his stories and characters.

Holding on to one line after the other as the movie travels from Bombay to Lahore, I was left trying to contemplate the soulful observations based on creating newer chapters of violence through lahu (blood) and loha (iron). 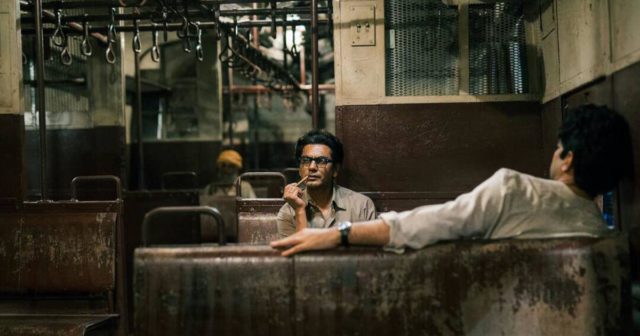 You are no longer steeped in a bygone era when you are certain about Manto’s accusatory tone claiming the importance of everyone’s life or no one’s.

Apart from revisiting Manto’s prose and characters, I was shaken by the alternate reality leading to such crucial observations.

The “Hiptullha” Friendship That Became The Currency

While trying to be in awe of Nawazuddin Siddiqui’s character transforming from one aspect to another, Shyam Chadha (Tahir Raj Bhasin) exudes shades of boyish innocence as he portrays the friendship that stuck before and after the Partition.

The word ‘hiptullah’ that was coined from the scorecard of a cricket match played at the Brabourne Stadium, printed in the newspaper read by Manto and Shyam while they were riding the train to Bombay Talkies became the driving force that rolled over to convey a meaning behind the enduring friendship.

The “hiptullised friendship” that dragged through funny stories remained in touch through sporadic letter writing.

After Manto decided to make Pakistan his home, he was torn apart from a city that he loved more than anything else.

In one such scene where he bids farewell to the city that asks no questions, he recalls about how he owes Re 1 to a shopkeeper as Shyam accompanies him to the port.

Although Manto tried to soothe the physical dislocation of his soul by wandering the streets of Lahore, he would call himself “chalta firta Bombay” or seek the warmth of Parsis giving him the feel of Bombay in Lahore.

Is Someone’s Company Worth 10 Rupees?

The heartbreaking opening segment of a teenage girl in a Bombay chawl who is sent away by her widowed mother to work as a part-time prostitute in exchange for money involving ‘outings’ with rich men tells of an unexpected tenderness and innocence.

When two young boys come and take her to the beach, she experiences immense joy. She returns the ‘dus rupaay’ given to her emphasizing the sheer joy of a young girl which cannot be valued for money, breaking the stereotypical imagery of a prostitute. Even I could share Sarita’s joy at that moment.

You Can Also Read: Is Raftaar’s ‘Mantoiyat’ For Nawazuddin Siddiqui’s Manto A Copy Of BTS RM’s 2015 Do You?

The Scars of Partition Retold In His Stories

Nandita Das is not keen on intensifying the liberal voice of Manto by only focusing on his well-rounded and compelling personality contrary to what most of the directors end up while attempting a biographic film.

The hard-hitting stories of the Partition dramatizing Thanda Gosht, Khol Do and Toba Tek Singh reveal not only the scars of the characters as a result of the devastating separation but that of Manto himself.

For instance, Bishan Singh’s mutterings inside a mental asylum speak of the brutal sufferings that didn’t spare the Muslim, Sikh and Hindu lunatics behind barbed wires.

“Upar di gur gur di annexe di bedhiyana di moong di daal of di Pakistan and Hindustan of di durr phitey mun” translating to a nonsensical mix of Punjab, Urdu and English words meaning “the inattention of the annex of the rumbling stairs of the dal of moong of the Pakistan and India of the go-to bloody hell” keeps me absorbed in a shattering experience one has to go through just to get rid of the damaged mind.

Manto’s Selfless Relationship With His Wife

Safia, played by Rasika Dugal, stands out in this character ensemble as a compassionate and a dutiful wife who accepted Manto with his many imperfections.

Being a constant reminder of how Manto was a better writer than a father and a husband, Rasika’s character felt natural without the melodramatic kicks giving a soft edge while confronting a man who needed empathy and love behind his usual mince of words and wry humor.

There is no denying that the movie was powerful and affecting but I wanted the film to give more than just mere outlines of a complicated personality emerging in bits and pieces through the ghosts of stories.

Sources: The Scroll, The Wire, The Hindu, The Indian Express, India Today

Manto Trailer: Shows How He Was Accused Of Obscenity For Using The Word ‘Bosom’ For Women’s Breasts