WhatsApp is absolutely the best messenger app which is closest to our hearts, but recently it has done something which is, to be honest, a little stupid.

WhatsApp has just limited the forward option to only five recipients. Supposedly, this step is to curb the spread of fake news. The question is- does this even make sense?

I mean, we all love WhatsApp and absolutely NO other messenger can remove WhatsApp from our hearts.

But why did you make life more complicated for us than it already is, WhatsApp, why?

FORWARDS AREN’T THE CREATOR OF FAKE NEWS, THE PEOPLE ARE

There are some people who have absolutely nothing to do, so they sit out to type utter bullshit for their entertainment and send it to people on WhatsApp. And then there are people who actually believe everything they read on WhatsApp without giving a second thought to it.

These two categories of humans are the creators of fake news. Not Forwards. Period. LOOPHOLES: THE SAVIOR FOR FAKE NEWS

Even though forwards are one way to send messages to bulks at a time, it is not the only way.

Here’s a list of loopholes that renders WhatsApp’s step to limit forwards ineffective.

The funny thing is, the message is actually received by the 256 people in their personal chats. So, this is almost like using the “forward” option, but here, instead of 5 recipients, I can send the message to 256 of them.

ALSO READ: If You Love Forwarding Messages On WhatsApp, Then You Should Know About Its Latest Updates

Even if 500 of them believe it (trust me, more than 500 of them will fall for it), and if they forward it individually to 5 people only, I still have 500*5 = 2500 and growing list of people who have fallen for this trap. This goes for broadcast lists too.

Limiting forwards didn’t solve the problem of fake news, instead, the fake news took more of our time now, than it did before. 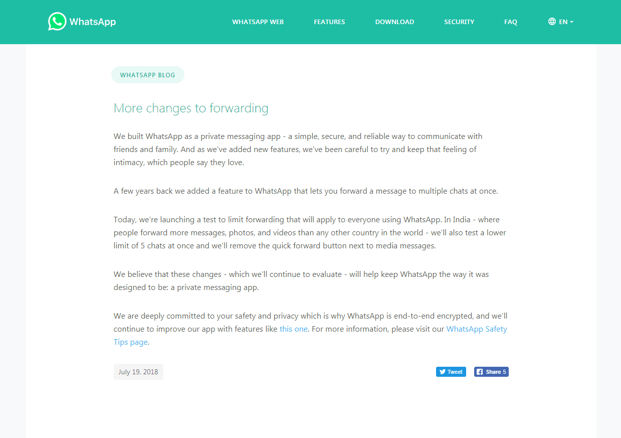 LIFE’S EASIER WITH FORWARDS AROUND:

There are some things in life which we are thankful for, one of them is WhatsApp forwards. Any important information, any funny messages, pictures and videos of dogs and puppies to light up one’s day, could be sent in a few clicks to the people we want to.

However, one thing that I am also grateful for is: with unlimited forwards gone, aunts and uncles will no longer send “good morning” and “good night” pictures and quotes to more than 5 recipients, and I hope those 5 do not include me!