Home Politics It’s A Shame That Pakistan PM Imran Khan Was A Harbinger Of... I am not combative by nature but whenever I had a quarrel with a friend, the one thing I couldn’t stand is the interference of a third person who’d rather poke his nose into our affairs than resolve issues in his own backyard.

So, I was naturally riled by Pakistan Prime Minister Imran Khan’s 50-minute long speech at the 74th session of the United Nations General Assembly (UNGA) on 27 September.

He exceeded the 15-minute time limit to serve platitudes on climate change, economic disparity and Islamophobia in the first half of his maiden address. The second half was solely devoted to the situation in Kashmir after the Indian government led by Prime Minister Narendra Modi scrapped Article 370.

His speech restored my belief in the idea that a man’s itch to be meddlesome is directly proportional to his incompetence in overcoming his own roadblocks.

You can watch his full speech here.

Fear Of Radicalization Or Opportunity To Incite Muslims?

Alluding to the clampdown on all communication in Kashmir post the revocation of Article 370, Imran Khan said,

“It’s arrogance that has blinded him (Narendra Modi) from the fact that what is going to happen when the curfew is lifted. Has he thought about it? Does he think that the people of Kashmir will accept the status quo because India has changed the constitution and taken away their special status?”

He believes that when the curfew is lifted, people of Kashmir will come out on the streets and be up in arms against the military troops deployed in the region. They will be so enraged that the stand-off will lead to a bloodbath.

“Kashmiris will be further radicalized. There is a danger of another Pulwama. India will again blame us. They might come and bomb us again. And then, another cycle might start. You’re forcing people into radicalization. “

While highlighting how those who suffer from atrocities and don’t get justice, eventually pick up a gun and shoot, he seemed to antagonize the Muslim community across the world as he wants them to rally behind him.

A Nuclear Threat In The Garb Of A Warning

I would’ve given Mr. Khan some benefit of doubt with respect to his “concerns” about the human rights violation faced by Kashmiri Muslims, even though it’s none of his business to escalate India’s internal matters, if it weren’t for his following closing statements.

“If a conventional war starts between the two countries…anything could happen. If a country 7 times smaller than its neighbor is faced with a choice- either you surrender or fight for your freedom till death, what will it do? I ask myself this question. We will fight and when a nuclear armed country fights till the end, it will have consequences for the world.”

So, on one hand, Imran Khan pretended to empathize with the people of Kashmir and wanted the Modi government to “lift the inhuman curfew which has lasted for 55 days.”

On the other hand, he implicitly yet blatantly threatened us with a nuclear war if we fail to comply. Even for a leader of a nation that harbors terror outfits to say this from the podium of UNGA was unseemly.

If the plight of Muslims disturbs him so deeply, why has he maintained deafening silence on the reported ill-treatment of an estimated one million Uighur Muslims by Pakistan’s all-weather ally, China?

Besides, he admittedly said that Pakistan’s debt has increased four-fold in the last decade. Given the mountain of debt that his country is buried under, he should look to create some breathing room for his own people instead of worrying about oxygen for others.

Yesterday, India exercised its right to respond to Imran Khan’s address and how. 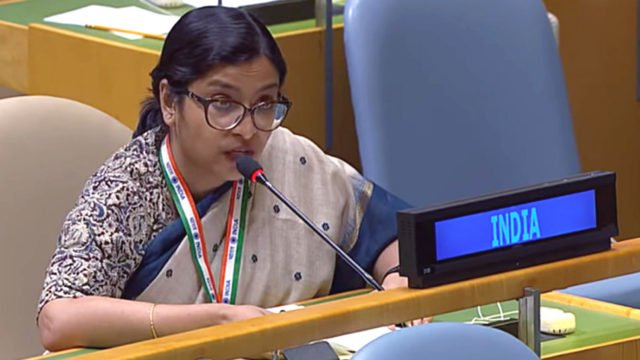 “Having mainstreamed terrorism and hate speech, Pakistan is trying to play its wild card as the newfound champion of human rights.

This is a country that has shrunk the size of its minority community from 23% in 1947, to 3% today, and has subjected Christians, Sikhs, Ahmadias, Hindus, Shias, Pashtuns, Sindhis, and Balochis, to draconian blasphemy laws, systemic persecution, blatant abuse and forced conversions.”

Most importantly, she articulated the sentiments of all Indians very well when she ended her reply with the following,

“The citizens of India do not need anyone else to speak on their behalf, least of all those who have built an industry of terrorism from the ideology of hate.”

Pakistan Writes Its Own Story Of Economic Downfall – A Classic Crisis