Home Campus Is The Hike In The IIT M.Tech Fees Justified? You must have heard of the saying that “one must not judge a book by its cover” which means that you should not be led astray by the appearance of a situation or a person.

Similarly, the faculty of the Indian Institute of Technology (IIT) cannot judge the capability or sincerity of a student on the basis of their score-sheet.

Just recently the Human Resource Development (HRD) Ministry announced a 900% hike in the fee of the Master of Technology (M.Tech) course at IIT.

Presently, the admission and tuition fees for an MTech course at IITs range between Rs 5,000 to over Rs 10,000 per semester. The hike will bring the fees to up to Rs. 2 lakh annually, at par with that of the fees of the B.Tech course.

The IITs will also stop the monthly stipend of Rs 12,400 given to MTech scholars who join the system on the basis of their graduate aptitude test in engineering (GATE) score.

They justified their doing by stating that, “The fee hike will discourage non-serious students, who after a few months of stay in IITs leave the program midway to take up employment or to prepare for competitive exams. This dropout in the middle of the program leads to wastage of coveted seats and denies the opportunity to other serious and meritorious students”.

This has left all IIT aspirants chanting ‘All Izz Well’.

Reasons Why This Hike Is Not Justified

IIT aspirants claimed that most of them apply for courses in this institution on the support of education loans. This hike forces them into taking more loans which ultimately burdens the aspirant’s family.

Students have risen to protest, some claiming that the government has initiated this hike without taking into consideration the fall in the quality of education provided by IIT.

You wouldn’t want to pay for a course and not make the best of it now, would you?

In a way this acts as a wall between the average and below-average scorers and their ultimate goal, to get accepted into IIT. 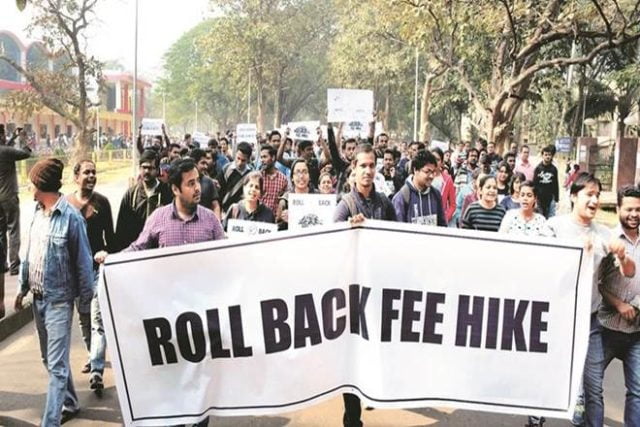 It also forces the students to center their entire concentration on scoring acceptable grades instead of understanding the concepts. For if their seriousness is judged on the basis of their grades, luck doesn’t fall in their favor.

Many a times, we’ve heard great speakers talk about how marks aren’t important but understanding is the main goal. The grasping level of every student is different and if they’ll be labeled as non-serious, our country might just be losing some great minds.

This can also lead to students not opting for the M.Tech course at all leading to the fall of its importance.

The HRD claimed that no student would be denied education and that needy students will be provided with financial support.

“There is no fee hike for the existing students. For new admissions, hike will be gradual over a period of three years or more, as will be decided by the respective Board of Governors of IITs,” the Human Resource Development Ministry said in a statement.

They added that “the fee for the M.Tech programs in IITs has not been revised for a long time whereas the cost per student has gone up substantially”.

There are over thousands of students enrolled in every IIT campus which eliminates the possibility of lack of funds. Along with every other student who are part of the protest against this hike, I too fail to understand the valid reason behind it.

Do you think this hike is justified? Let us know in the comments below.

This Badass Woman Turned The Tables On The Sleazy Assistant Director, Who Wanted Her To Compromise