Home Food In An Age Of Cow Vigilantism, How Do Beef Eating Malayalis Feel? The beef over the issue of eating beef (pun intended) has been going on for quite some time now. The long-standing debate is because, for the majority of the population, cows are sacred animals and hence should be kept away from any butcher’s hands.

Well, I’m not denying that or the religious value placed on the animal. I, as a Hindu, do respect such beliefs.

But, as is the case most of the time, the problem that I, and many like me have is with the term ‘majority’. Is that term closer in meaning to ‘every single person’ or to ‘excluding many others’?

I do not want to get into the usual debate that other religious and political groups have been engaging in. The only point that I’m trying to make is that there is one particular population, irrespective of their religious leanings, who have had conflicting thoughts over this beef.

That population is from God’s Own Country, Kerala.

Malayalis And Their Love For Beef:

We Malayalis used to joke amongst ourselves saying that if Kerala ever happened to decide on an official ‘Food of the State,’ then that would definitely be the iconic Porotta and Beef combo. That is the kind of emotional attachment that people from Kerala place on this meat. 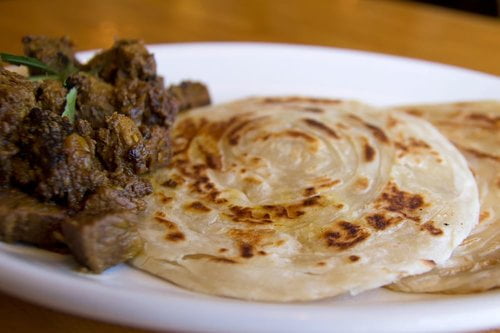 So, when the discussion on the ‘Cow Protection Movement’ started spreading, you can imagine the kind of distress and confusion it caused to this section of the country.

Malayalis started feeling confused, conflicted and worse, isolated from the general crowd; for as much as a Muslim from Kozhikkode would love to have beef biriyani, so would a Hindu from Thrissur.

Also: Watch: Velichappads: Kerala’s Temple Oracles Who Claim To Be Possessed By The Gods

Recently, this moral policing over cow meat seemed to travel all across to Germany, where the Consulate General of India (CGI) had organized the ‘Indian Fest’. As a part of this, cultural organizations from various states of the country were asked to serve popular dishes from their places.

The Kerala Samajam Frankfurt (KSF) decided to put Porotta and Beef Curry in their menu, which was then met with heavy objection from Hindu right-wing groups. After filing petitions, accusing the KSF of ruining Indian culture, and taking up campaigns on Facebook, they eventually managed to get the Malayali group to change their menu. 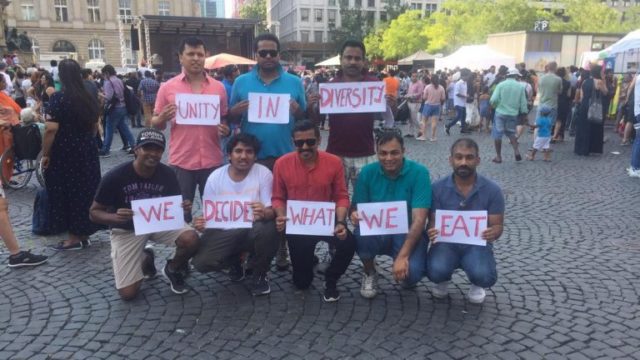 They said in a statement on Facebook, that they went ahead with the decision keeping with the CGI’s request, and by ‘representing the peace-loving “GODS OWN COUNTRY”… to uplift the core value of INDIA – “UNITY IN DIVERSITY.”‘

KSF ended up boycotting the fest and held a silent protest in Frankfurt.

As a (former) student of Science, I think that meat is something that humans have got accustomed to eating as a result of evolution. So, taking into account that diversity in our food habits, we must learn to respect, if not celebrate individual food choices.

The majority v/s minority debate may just keep going on for a long time but the least we as citizens could do is keep in mind the fact that India is a DIVERSE nation, UNIFIED as one.

Hoping that this was a decent enough introduction to our food habits and interests.

Sincerely (with no evil intention whatsoever),