We are living in times of rising equality or at least in the urban regions, women are becoming vocal about having equal rights as men.

The #MeToo movement of India recently showed that Indian women will not be silent anymore and will call out those who act in an inappropriate manner with them or try to take advantage of their position.

Not to say that everything is perfect and good, but slowly and steadily the mindset does seem to be changing.

Unfortunately, there are also some people who are not taking the whole concept of feminism in the correct way, this includes both men and women and believe that feminism allows women the right to act whichever way they want even if that includes being hypocritical.

Is It Okay To Slap?

A few days back, I was sent over this video as a WhatsApp forward:

Now, while the video was not really that funny, it was the reaction of another male in the group who stated how it was not right to hit a woman that made me curious.

According to me, considering the events of this particular video, it made sense for the woman to be called out for slapping the man.

Okay, before you jump on me and call me names, hear me out.

In the video, a boy comes up to a girl, without really being creepy or anything, and declares that he loves her.

The girl then promptly slaps him, and asks “what did you say?”, to which the boy then slaps her back and said, “if you didn’t hear in the first place, why’d you slap me?”

Which made us enter into a heated debate of whether it was alright to slap a girl or not and how it goes against feminism.

In my opinion, it all depends on the context and punishment, if it calls for it, should be metted out regardless of one’s gender.

This ideology that a girl should be let off just because she is a girl is not enough and furthermore creates a space where girls feel their irresponsible actions have no consequences. For every wrong done by women, they can easily hide behind the ‘feminism’ debate. Feminism is about equality, so if you as a girl are hitting someone out of a whim, then he also the right to react similarly.

It also enforces the stereotype that a girl can hit because being weaker they cannot really do any damage or hurt someone.

While there are global campaigns and rallies and social media posts all declaring how wrong it is for a man to hit a woman, the reverse, a woman hitting a man is not that often seen. 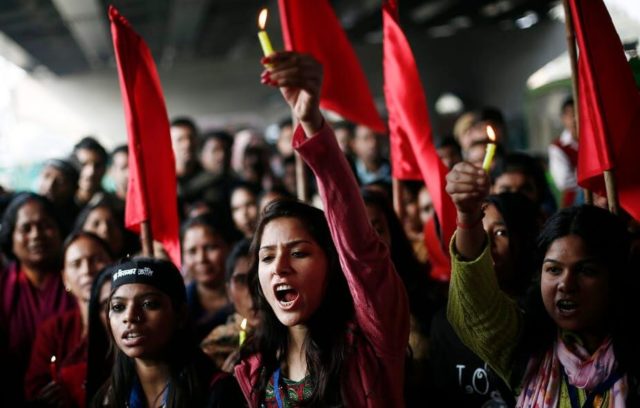 Read More: I Was Sexually Assaulted But I Don’t See Every Other Man As A Sexual Predator

When Is It Okay For A Man To Slap Back A Woman?

Recently I’ve been seeing media making it seem okay for women to be violent against men and making it some sort of feministic trait showing how powerful they are, whether it be movies or series.

Taking just the context of slapping, I am not against females using violence to protect themselves.

That is needed and a very good way to show the attacker that they are not just going to take the abuse.

In cases of times where a man is downright trying to harass you, sexually or otherwise, using cheap and vulgar language, trying to touch you inappropriately, just plain outraging your modesty, then it is the perfect time to take a slightly or active violent action to prevent any further harm and also to gain back the upper hand.

If a man is trying to invade your personal space or insult you to the level where you would slap even a girl/friend, then it is totally okay to slap another person.

But media has recently started to make it okay for women to be violent towards men for no good reason, showing it as them being powerful and pressing the whole concept of ‘woman is right and the man deserved it’.

However, that is very very wrong, a slap to the face is an incredibly humiliating and disrespectful thing to do and should never be used as an empowering tool.

Only if the situation demands for it, is it alright for anyone to use violence against ANY person.

This is not a male or female issue, but something that applies to almost everyone.

If hit out of a whim or without solid grounds, why shouldn’t a male slap the woman back?

What do you think? Is it alright for a boy to slap a girl if she slapped him first for no good reason?

‘I’m Not Like Other Girls’: 4 Times That Feminist Women Belittle Others Without Realizing