Now before I get into this and explain why I disagree with Mr. Sardesai on this, here’s a snippet of what he said on stage at an event that took place recently –

To quote Mr. Sardesai, “Kohli reminds me a bit of Narendra Modi. You know, these are polarizing figures, who believe in I, me, myself. This narcissism must end, whether you’re a cricketer or a politician.”

To begin with, bringing PM Modi into this debate and comparing him to Kohli doesn’t make sense. I mean, how hateful you’ve got to be to compare two totally different personalities and equate them to make a point?

However, now that someone did make the comparison and labeled them both as ‘narcissists’, let’s talk about narcissism and whether or not personalities like Virat Kohli and Narendra Modi fit the definition of the N-word.

The Oxford dictionary defines narcissism as, “excessive interest in or admiration of oneself and one’s physical appearance.”

So if you are labeling someone as a ‘narcissist’, what you are trying to say is that the person is self-centered and lacks empathy.

In a team sport, there is no place for a narcissist. Your self-obsession won’t take you too far, especially on the international stage, where the level of competition is unreal.

Virat Kohli has been the captain of the Indian test team for more than three years now, and if he were a narcissist, the team wouldn’t be where it is at the moment.

Kohli is a polarizing figure, I agree. So is Narendra Modi. Their personality is what sets them apart from the rest. However, it is Kohli’s obsession with winning the game and doing well for his country that drives him, not his self-obsession.

Check out this interview he recently gave during India’s ongoing tour of New Zealand.

Pick out any Virat Kohli interview, for that matter. He is a guy who is not driven by numbers, but by winning games for his country.

Also Read: Who Is The GOD of Cricket? Here’s The Epic Battle On Dhoni vs. Kohli

Moving on to Narendra Modi, he is someone whose political campaigns largely involve taking digs at the Gandhi family and reminding the nation of their supposed failure in the past 70 years.

Modi’s polarizing personality is unmatched. India hasn’t had a figure like him, at least not after Indira Gandhi. In fact, BJP has used his persona to its advantage ever since he became the face of the party. 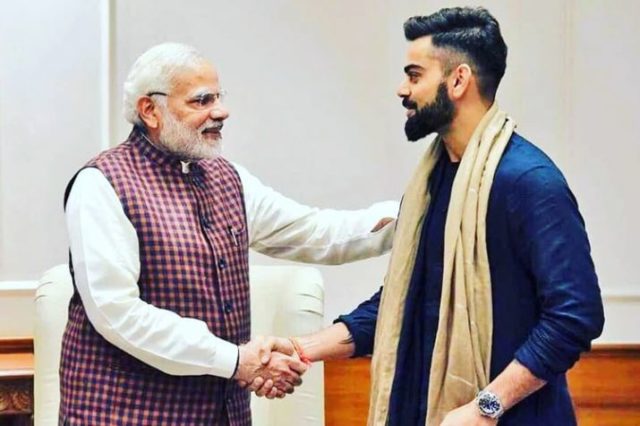 It may be all about Modi for BJP and Congress. However, it isn’t so with Modi himself, and this is where Mr. Sardesai got it wrong. Neither of Kohli or Modi is all about ‘I, me, myself’.

He even went on to criticize Kohli’s captaincy at length, talking about how he isn’t getting the best out of his teammates. Mind you, this statement of his is coming after the historic series win in Australia and what looks like another convincing series win in New Zealand.

When even cricketing icons like Sunil Gavaskar are appreciating Kohli’s captaincy, here’s a guy who is criticizing him for it. His bio reads ‘failed cricketer’, so I’m not sure if we should take his views on cricket too seriously.

Lastly, he talked about a need for both Kohli and Modi to look into the mirror. I’ll tell you what, India has a population of 1.3 billion people and that population serves as the mirror to both. Find me a bigger mirror, I’ll wait.

Kohli Thinks This Guy Is The Next Best Bowler In The World; Breaking Kapil Dev’s Record With A Wasim Akram Touch