The much talked about PM Modi biopic is out and the reaction is as expected, with many critics giving it negative reviews and talking about how it is essentially a propaganda filled film.

The Vivek Oberoi starring PM Narendra Modi film sees the journey of the politician from his childhood to him becoming the Prime Minister of India and touches upon some of the peak moments from his life and career.

Since the trailer launched, the film has been in troubled waters what with the Election Commission (EC) not allowing the film to release during the election time.

Due to this, the film was released just after the results came out and while the reviews have not exactly been favourable, Bollywood has still tried to give the film and its events their own twist.

Here we take a look at some of the stupid and frankly typical Bollywood things that were shown in the film:

#1. Indira Gandhi As A Bond Villian

One of the things that really jumped out was how villainous the Gandhi family or specifically Indira Gandhi and Sonia Gandhi are shown.

Manhoman Singh for that matter is a joke of a character in the movie where he essentially remains silent and is a meek rat in front of all the powerful people.

But where Sonia Gandhi is still shown to be scared of this ‘Modi’ who is so charismatic and powerful and somebody to fear, Indira Gandhi for that matter is shown in a full on Bond villain mode.

There is one scene where she is sitting in her garden on a chair with a flower in her hand and she is just speaking her dialogue in a typical evil person manner.

The lighting, the way the shot has been taken, the dialogue itself, all want to insinuate not only the importance of Modi itself but that the infamous Emergency itself was taken because of the threat that he posed as the leader of Navnirman Andolan in Gujarat.

Another scene that really did not make sense or at least could have been directed is the flag hoisting scene during the famous Ekta Yatra of BJP during 2013.

As per reports, firstly the flag hoisting was not really a success as otherwise shown in the movie.

While the actual reality was nothing like it was shown in the movie, with the entire ceremony barely lasted 12 minutes, the actual person who was doing the hoisting was Murali Manohar Joshi with Modi assisting him.

Joshi had carried the tricolour flag with him from Kanyakumari and had an important role in this whole incident.

However, it seems that the movie just dismissed this whole thing and chose to show Modi in a superhero or even better a Singham style Bollywood hero who just runs across the bridge unafraid of the firing bullets and hoisting the flag all by his lonesome.

The scene was just this side of nonsensical though since we can see the rest of the party and volunteers trying to duck and protect themselves from the bullets while Oberoi’s Modi is just waving the flag everywhere giving away their position and letting the militants know exactly where to fire.

The meme scene that is the ‘Mera Gujarat jal raha hai’ clip has already spread virally with many people on social media sharing their own take on the meme.

But it was the one with Cersei Lannister, from the popular show Game of Thrones that really caught the eye. 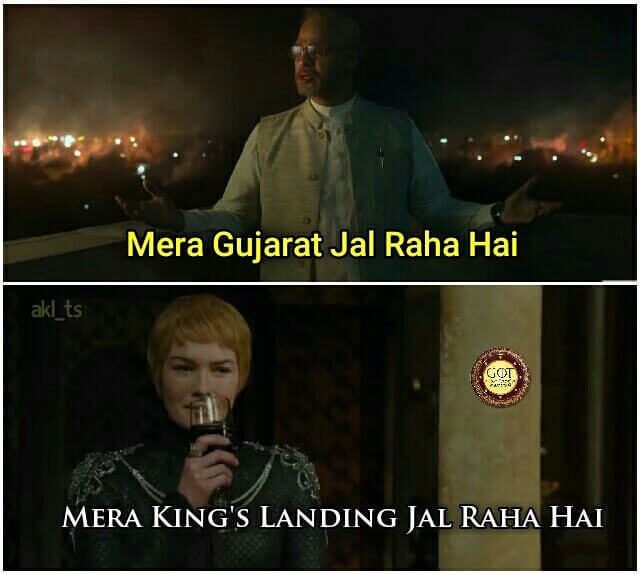 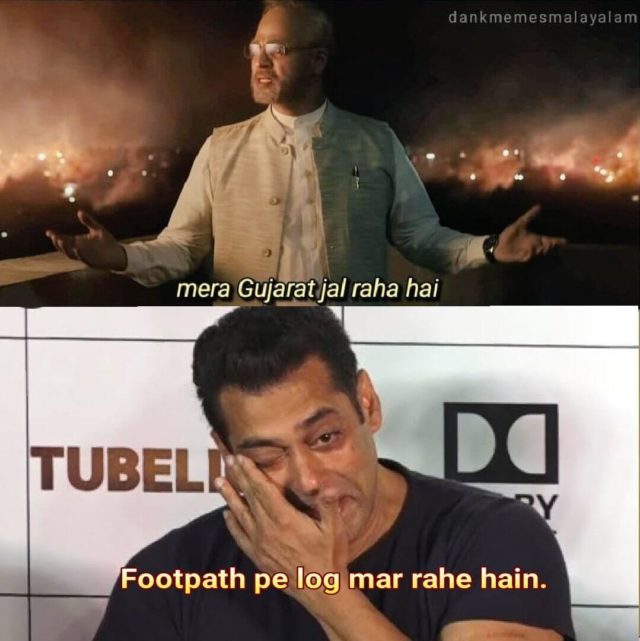 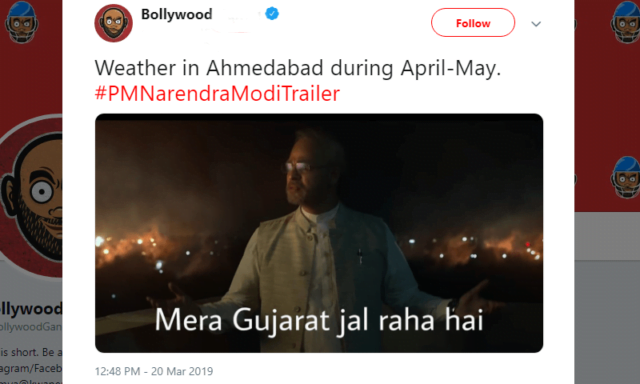 These were some other memes that people made using the template of the scene, which seemed more of a pun than anything really serious.

Had it been handled better, perhaps even for a propaganda film it could have been something impressive.