One is ice, the other is fire. Actually, that’s about it.

They really don’t need any introduction and just their names are enough for anyone to start quaking in their boots or sandals. OK, so they are fictional characters, but that doesn’t mean they don’t have feelings or a mind of their own.

I present the fierce and humongous Drogon, son of the Mother of Dragons and the Night’s King, the  Lord Commander of the Night’s Watch who lived during the Age of Heroes.

Such iconic figures and with an enormous fan base, we were very lucky to get a hold of them and convince them to give their precious time to us.

They’ve both had a pretty eventful, to say the least, year and we were very curious what is going through their head at the moment.

So ED caught hold of them for a quick chat, and presumably, we sent three of their bravest writers (or those who lost the rock paper scissors and had to go), asking their opinions, on the recent events in their respective homelands.

I’m just messing with you. Of course I speak the common tongue, although I prefer Valyrian.

Chirali Sharma (CS): What I want to know is, you obviously love your mother and your siblings. And your actions in the past season have proved your loyalty to them and your complete need to protect them in any manner. Then why did you leave her, in a foreign land no less, in the first place?

Drogon: I, Drogon, am her son. And I do love her, and will always protect her. But I also cannot be caged. Mother says I get that from my father, Drogo the Khal. I knew that I was creating troubles for mother among her new subjects in Meereen, and she would never cage us. My choices were slim. Had I stayed I would have ended up resenting her like my siblings do. So I left.

Manaved (MD): You must certainly be missing your brothers, don’t you?

Drogon: Yes. I do. But mum has grounded them, and I really can’t do anything about it. I’ve tried tipping off PETA, but they just thought it was a prank call about Dragons in the basement needing rescuing.

Jibin (JMG): You are Game of Thrones No.1 pet/protector, now that Jon Snow’s Direwolf failed him when he needed him the most. What do you have to say of this?

Drogon: Must have been chasing his own tail, Ghost. Well, let’s just say Jon Snow must be regretting being born in the Stark family. I mean, if he were a Targaryen, he wouldn’t have had such a distressing end.

Jibin (JMG): Finally, your show down in the pits has won you many admirers among the Meereenese public and the Harpies alike. Who is your role model?

Drogon: Charizard, of course. In fact, my show down at Daznak’s Pit was but a pale imitation of his rescue of Ash from the Aerodactyl. You could say, I learned from the best. 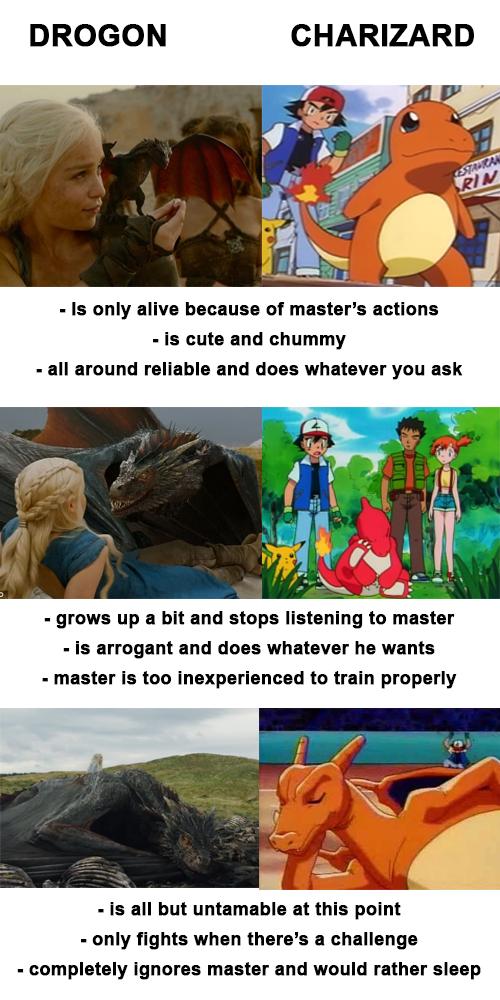 Chirali (CS): One last question, Westeros is in chaos. What do you have to say about that?

Drogon: Out of the chaos will emerge the true winner. Westeros needs to be wiped clean for my mother to take her rightful place on the Iron Throne.

Chirali (CS): um…Hello. How are you? Are you sure you are not busy? I can come in some other time, I’m sure.

Manaved (MD): So, are you Benjen Stark?

Night’s King (NK): Don’t be ridiculous. *Shuffles around nervously* Whatever gave you that idea? The chance of me being Benjen Stark is about as much as Jorah Mormont getting it on with Daenerys.

Jibin (JMG): What do you guys want? Power, fame, glory, women…. what? Or are you fleeing winter just like the rest of the North?

Night’s King (NK): We are the Winter, my little child. What do we want? Well, as Alfred would say, ‘Some men aren’t looking for anything logical, like money. They can’t be bought, bullied, reasoned, or negotiated with. Some men just want to watch the world bu- *cough* Freeze!’

Chirali (CS): Wow…diabolical. Um, so one last one, any comments on the fact that Jon Snow is dead. Betrayed by his very own men?

Night’s King (NK): Aah… yes. I heard about that. An unfortunate thing indeed. I liked that kid. Its interesting how petty you little humans can be. They think they are so smart. Yet, its incredulous how idiotic you all can be. I told Jon, you know, to join me. The kid was too noble to do that. Fool. And what did he get in return. If he had joined me, he’d still be alive. Well…sort of alive.

Manaved (MD): Wait a second. What’s happening to me?

Night’s King (NK): You’re becoming a Wight. Don’t worry, it won’t hurt. You also get a 40% discount at every Baskin Robbins outlet. Totally worth it.