Home Technology Did You Get Trapped In The Netflix Phishing Scam? Netflix users are becoming the victim of a new phishing scam where users are asked to verify their account details after receiving a temporary account suspension email.

Customers of the streaming service are asked to exercise caution while responding to such emails.

However, being cautious against such scams is not as easy as it sounds.

Netflix’s customers are receiving a mail with the logo very similar to the official logo, the only difference is that the ‘I’ in Netflix is actually lower case ‘L’ instead. The logo looks completely identical because Netflix logo is in all caps.

The subject line of the fake Netflix email is “We’ve temporarily suspended your account until you verify your details.”

In the body of the email, customers are informed that their account has been suspended due to some error in the automatic verification process. However, the first suspended (word) is in bold and spelled wrong in the mail and that is one of the tells to dismiss the validity of the email. 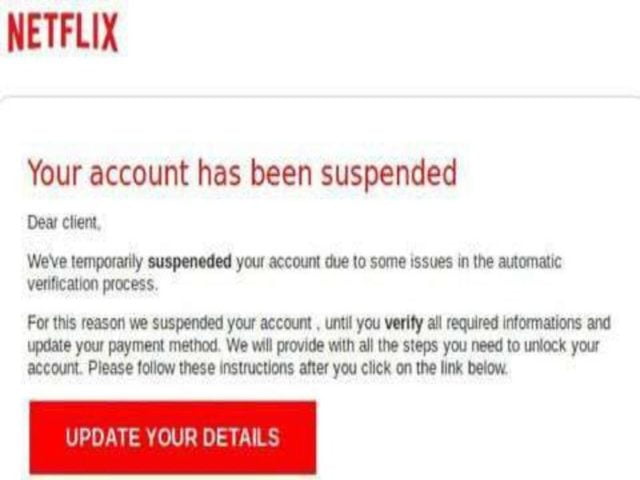 Customers are then asked to update their details and are provided with a button to jump to a fake URL created by the phishers which resembles the actual Netflix login page.

After logging in the customers are asked to update their credit card details.

The scam was detected by an email security service called MailGuard which detects abnormalities in emails and blocks such phishing emails from reaching the users.

Netflix scams are, however, very common. There have been around 20 reported scams in January itself.

There has been, however, an increase in the sophistication of the crimes happening on the internet. Phishers have started using big company names so that people are not that vigilant after reading the name that they trust.

Users have to identify red flags like misspelled words and bad grammar, or if the tonality of the email is that of extreme urgency.

A basic vigilance is now necessary while even using the most basic features of the internet.

Facebook’s Merger Of WhatsApp, Instagram, & Messenger App Will Be A Nightmare For Users