In an alarming tweet, comedian Kaneez Surka came out with her #MeToo India story about how another female comedian Aditi Mittal forcefully kissed her on stage 2 years back.

Ever since allegations against comedian Utsav Chakraborty came out, it has been a whirlwind of more and more allegations coming out not just against the man in question but various other AIB members like Tanmay Bhatt, Gursimran Khamba, Director Vikas Bahl, Sanskaari uncle Alok Nath and more.

Utsav was accussed of sending indecent and sexually explicit messages on platforms like Snapchat and more to women. Khamba and Bhatt in light of their allegations have stepped away from AIB and Vikas Bahl is also reaping the consequences of his actions.

While the #MeToo India movement was something that was for a long time coming, it was rapidly being seen as a woman-only drive targeting men. 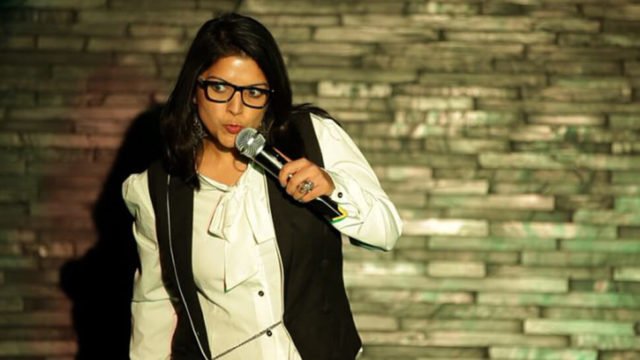 What Happened With Aditi?

Kaneez Surka, the host of ‘The General Fun Game Show’ and a AIB regular, has in a shocking revelation come out with her own experience of harassment but this time by another woman.

The incident apparently left Surka “humiliated and shocked” when Aditi Mittal who is popular on YouTube for being a bold stand-up comedian kissed her while she was performing a show in 2015.

Mittal kissed Kaneez and as per her tweet even forced her tongue inside of her mouth, something that greatly affected the latter.

“I need to tell my story as it happened to me. Two years ago, at a comedy show I was hosting at Andheri Base, in the presence of an audience of 100 and many comedians, Aditi Mittal walked up on stage and forcefully kissed me on my mouth out of the blue and put her tongue in my mouth, while I was still on stage and without my consent.

It left me humiliated, shocked and completely stripped of choice. Every person is entitled to choice and boundaries and she violated mine. When I mustered the courage to reach out to her a year ago, she first apologised but soon turned hostile towards me, leaving me confused and hurt.

Seeing her name all over Twitter as a champion of the cause has been triggering me immensely. Out of my belief that the opportunity to reform is the only way forward, yesterday, once again, I spoke to her through a mutual friend and requested her to come out with a public apology and save me the pain of having to reveal my identity.

Despite having acknowledged it earlier, she denied kissing me on the mouth, gaslighted me and asked me to cross check. I have proof but I thought we believe the victim. Her actions yesterday have hurt me further and burdened me with the task of having to do this but I don’t want to be silent anymore. A public apology for violating my consent will be my closure.

To the men reading this, this is not about you or an opportunity for you to use this for your own agendas. This is not retribution but for personal closure. Please respect this.”

For a few days now, people were getting the perception that the Indian #MeToo movement was too women-led and there was not exactly enough participation of men, trans or other minority groups.

But Kaneez’s incident has finally shown that women are not entirely innocent always and can also be on the other side of being an oppressor.

It also shows the double standards here since it wasn’t long ago that Aditi was calling out Utsav for his actions. 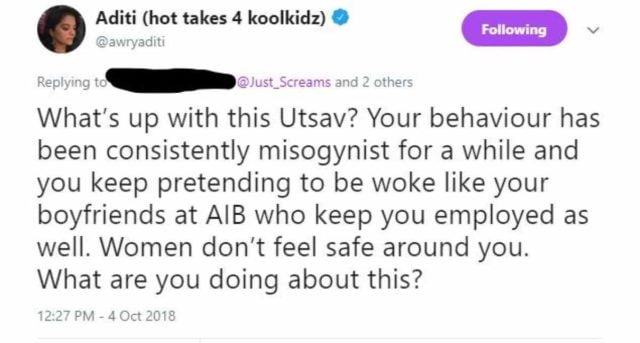 That is exactly what is wrong with the movement in india. Everyone tries to be oversmart and woke and actually isnt. For @awryaditi this is nothing but for @kaneezsurka it must have been humiliating. There are some money-makers like @weeny and her gang on the other hand. Sad!

Will Aditi Mittal be chucked out of all gigs now? Will her shows b cancelled? Will @amazonIN @NetflixIndia remove her episodes? A lot needs to be answered after these allegations #MeToo This is something no one would have expected. But this will b definitive say on repercussions https://t.co/Vt1bsMkJbM

Kudos @kaneezsurka 👏 Sexual abuse is gender-neutral. Brave of you to call out Aditi Mittal's hypocrisy. https://t.co/nhR4HKudWo

The #Metoo India movement is not only gaining momentum in the right direction but is also extremely powerful in dethroning people who use their privilege to exploit others.