This past week or so has been a hectic one on social media with 2 of the biggest Bollywood weddings taking place one after another.

First it was the never ending procession of Deepika Padukone and Ranveer Singh wedding which literally felt it would not have a finish line, as every day a new event was coming up, be it a wedding or a reception, then another reception, and another reception kept on filling our timelines.

After that, it was the east meets west wedding of Priyanka Chopra and Nick Jonas that was almost as grand as the royal wedding itself.

And believe me when I say that sure, it did get a little overbearing on our Twitters and Instagrams to constantly see posts about another new event related to these weddings, but nothing that really bothered me thaaaaaat much.

However, it does seem that these extravagant weddings did rub someone the wrong way, when this screenshot was shared on a WhatsApp group. 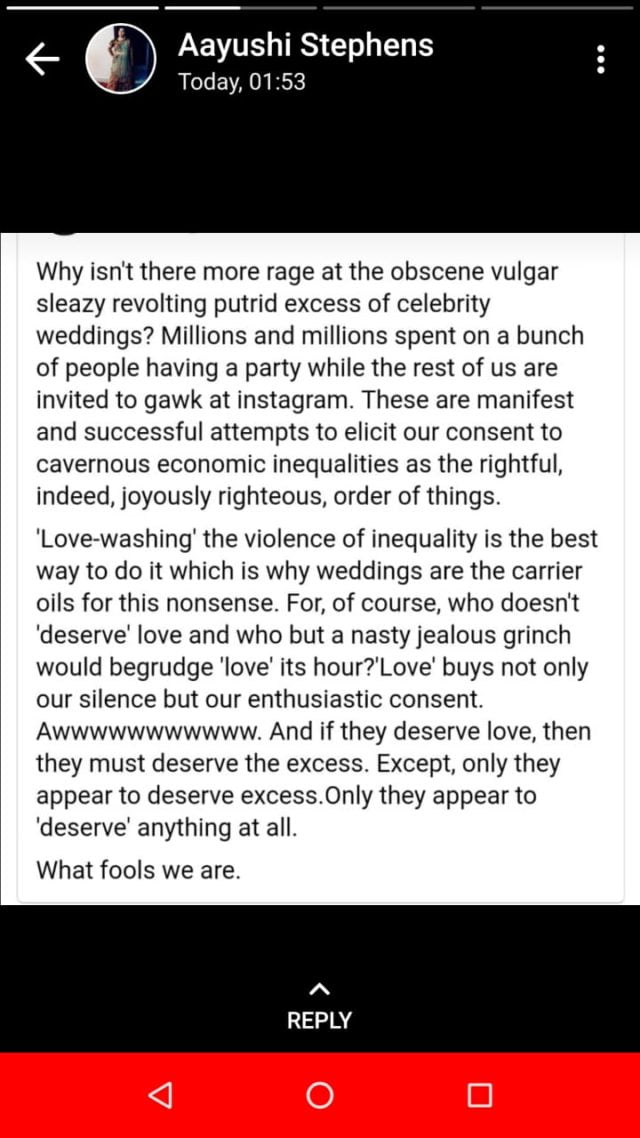 And interestingly this did bring up an interesting conversation on our private group, of how millennials are constantly trying to find almost anything to criticise over and obviously it got followed up by jokes. 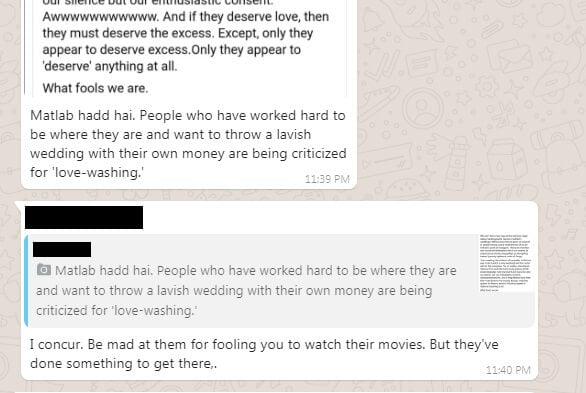 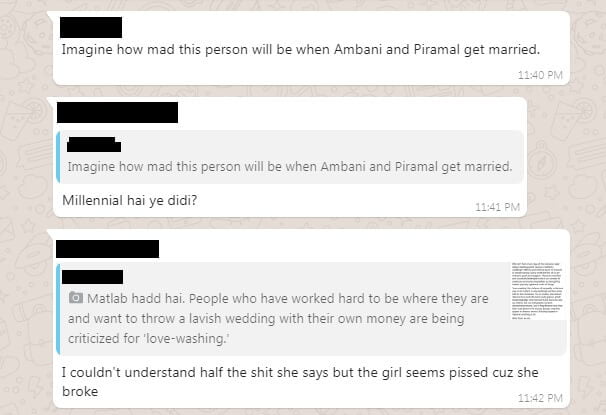 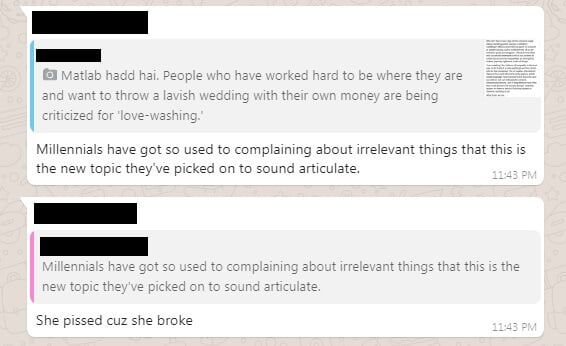 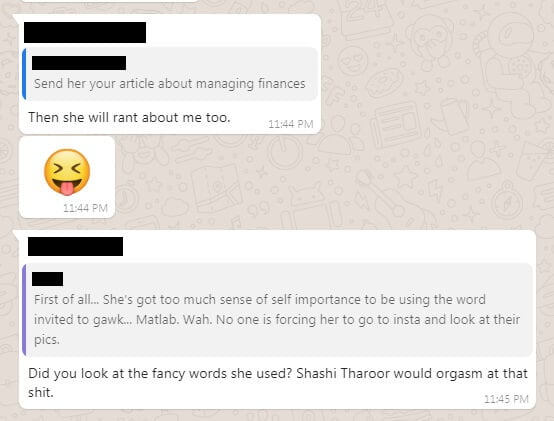 This topic though, would not leave me alone, and a simple search, showed that the original post was made by a girl called Priyamvada Gopal on Facebook and even reposted by another person. 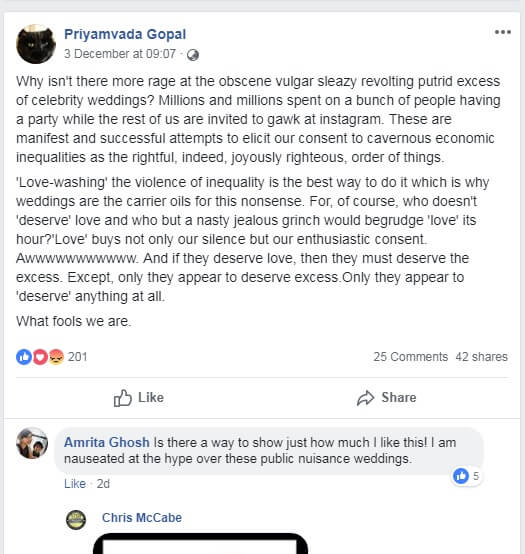 And it was seeing all the people agreeing to her in the post that really bothered me, seeing how 2 people spending their own hard-earned money was becoming a cause of stress to them.

It is disturbing to see that this person is actively asking people to get angry over mere weddings? No, don’t think about all the other hundreds of problems in our country over which it is perfectly valid to get angry over and instead take issue with this topic.

Because how dare a couple spend money that they worked for over the years and spend it on a day that they consider to be important to them, right?

“Millions and millions spent on a bunch of people having a party while the rest of us are invited to gawk at instagram.”

did not sit well with me, especially the use of the word ‘invited’ which according to me, creates a sense of entirely too much self-importance. No one is inviting you ma’am, they are celebs, of course they will be splashing their big day on their social media. You chose to follow their account in the first place.

And the media too will want to cash in on the frenzy around it, which by the way, it created by people just like you and me who want to know ever single thing about these stars.

Another line that confused me was,

I mean… what? How are you even making that conclusion from this? How do they only deserve this? Anybody who has worked hard in their profession, if they so choose to live a little large is allowed to do so. There is no ‘deserve’ here, anybody can have excess. Who made someone like you or me the judge in the first place?

And it’s funny for a girl sitting in the fancy Cambridge University, to be talking about excess, when the fees of 1 semester there, after scholarship, is something unimaginable.

Hypocrisy at its finest.

Forget about talking any patriotic stuff on where all India has gone globally, and how far it has reached, it is a shame that you cannot even see the woman empowerment in this.

The 2 brides here are no trophy wives, instead they probably are even more famous and popular than their husbands. 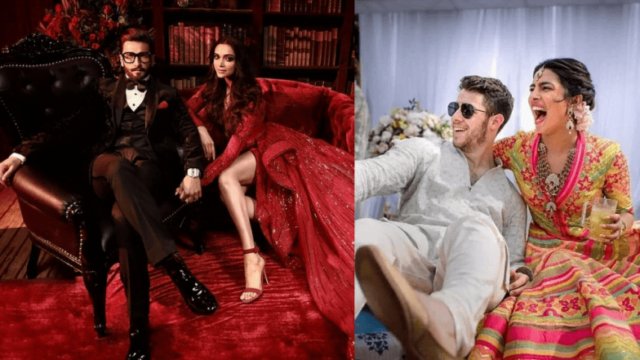 Whether you take Priyanka, a small town girl coming from a tier 2 city, with no Bollywood backing, 0 exposure, has a wedding which is on the world map, all by her own hard work, or you take Deepika, who started with a modelling career, and today her wedding is being compared with Bollywood royal blood.

Both of these females have reached a place where they can have the best wedding money can afford, after working for years. Priyanka who has been working for almost 18 years now and Deepika, is completing 14 years as a working professional, did not have any extra favours or access that star kids have, yet have managed to make a place for themselves in Indian cinema. And clearly all the money spent, is well hard earned by them.

So what now, should people just stop spending money they have worked for and saved all these years for and have a small wedding just to make sure no one gets offended?

Should people stop getting married and enjoying their marriage functions?

To be honest, I would understand if you were getting angry over a minister or politician or their relative having such a lavish wedding. Because then, you can think of where exactly that money came from, either corruption or the tax payer’s money.

There if you call them out for an expensive wedding it makes sense, but for these private citizens you will get angry?

How intolerant are you?