Fair and Lovely I expect this from, but when Garnier starts to get on my nerves then it becomes a problem.

Recently, that stupid Alia Bhatt ad for some Garnier fairness ad cream has been popping up on my television and YouTube videos a bit too much.

So much to the point where I can almost recite that annoying and irritating tinkle ‘Say hello, say hello to Garnier light. One week one week spotless and bright’.

And I’m like… are you kidding me? I was not expecting that of Alia Bhatt the so called, woke young Indian millennial. 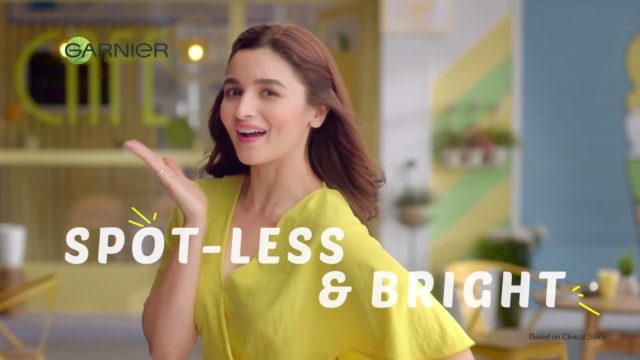 Read More: Breakfast Babble: Can Delhi Autos Stop Cribbing About Cab Services And Low Fares When It Is Their Fault!

First all, Yami Gautam has been turned into a social media meme due to her association with Fair and Lovely, and yet no nobody comments on Bhatt’s ad literally promising fair skin in just 1 week?!

Also, speaking of Fair and Lovely, it is hilarious how they are trying to change their brand image with their new HD glow product which is essentially replacing the word ‘fair’ in their marketing angle. It’s just… amazing.

Second of all, why the hell are such kind of ads still being telecasted I don’t understand?!

There is quite a lot of media and common uproar about such fairness creams and how racist and wrong they are, and creams are still using that tactic?

Don’t brands understand that people are not interested in the product, only making jokes and mocking it!

It will not help with the sales as sooner or later these jokes and all will trickle down the market to all sectors and affect the profit they make.

Also, young actors really need to be more careful when signing onto such brands.

The only cream brand that I believe semi-tolerable ads would be Nivea.

But seriously, this ad needs to go bury itself 50 feet underground and never come up again.