Today we take you back to 1885, when the Indian National Congress was formed and the rest is history.

The founding members gathered at Gokuldas Tejpal Sanskrit College in Bombay for convening the first session of the Indian National Congress, with 72 members in attendance, while there were no women present in this session. 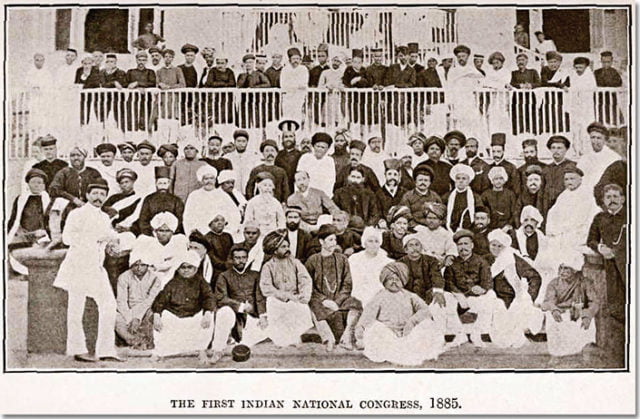 The political ideology surrounding the Indian National Congress can be roughly termed as moderate politics. They are not yet a full-fledged party but more of an annual conference which will deliberate and adopt various resolutions.

The British were of the view that the formation of such political party will help channelize the dissent amongst the Indians regarding the colonial rule into something benign and would promote healthy discussion amongst the masses.

The president spoke about the objectives of Congress stating: “promotion of personal intimacy and friendship among all the more earnest workers in our country’s cause in the parts of the empire and eradication of race, creed or provincial prejudice and fuller development of national unity”.

Following the President’s speech, the Early Nationalists, presented the following resolutions before the British:

Also Read: Congress Won In Rajasthan Due To Sachin Pilot’s Real Grassroots Work But Is Still Not Made The CM

Lord Dufferin who was closely monitoring the first session of the Indian National Congress, called the organization a ‘microscopic minority’.

In the following days, this statement made by the Viceroy, angered most of the Indian leaders and from this point onwards, the economic agenda came to the forefront.

They demanded the presentation of budget in front of the assembly, they highlighted the growth of agricultural labour, the fall of handicraft industries, rise in rural indebtedness, poverty, and famine.

The closing of the nineteenth century and the early twentieth century witnessed the emergence of the ‘Extremists’ within the Congress, who adopted a more aggressive approach towards British rule.

The young men advocated for ‘Swaraj’ as the end-goal, which was to be achieved by self-reliance and independent methods.

Later, Mahatma Gandhi returned from South Africa and bought a new wave of political ideology with himself. Satyagraha and non-violent resistance became the main aspects of Congress strategy and thinking, after 1920s.

Gandhi’s ideologies and methods were marked differently from its members and were slow to gain acceptance amongst all. However, soon he became a key member of the Indian National Congress.

In the subsequent years, the INC played a pivotal role in the freedom struggle of India. With over 15 million members and 70 million participants, the party ousted the imperial colonizers from India and formed the government to lead a new India.

The Good And The Bad Of BJP And Congress In A Nutshell: 2019 Elections