Facebook after acquiring Instagram, WhatsApp and probably all of its 2.3 billion users’ data, is now coming for the videos.

Facebook Watch, their new video streaming platform is said to give competition to other popular names like Netflix, Amazon Prime etc.

The video on demand service was announced in 2017 on 9th August with it becoming available for all international users in August 2018.

It seems like where there is money… there is Facebook. And it is certainly getting its money with mid-roll advertising breaks and plans to bring in pre-roll ads too.

It might not seem like much but when you realise that as per reports Facebook Watch gets around 720 million viewers per month with around 140 million people spending at least 1 minute at the service, per day, you can do the math and figure out how much money Facebook is earning from this.

So I knew that Facebook was planning to do something in the OTT sector but did not really keep up with when it would be out… especially since I have absolutely no plans to use it.

I’m pretty sure Facebook will find a way to make me use it anyway. I mean, how can it willingly allow a user to not take part in another of their additional service.

And it happened when I came across the trailer of their upcoming drama web-series called ‘Limetown‘ premiering at Facebook Watch on 16th October 2019.

Not only is the story pretty popular, based on a podcast fiction series that is well-known across US but it is also starring mainstream actors like Jessica Biel, Stanley Tucci.

But wait… there is more as some episodes of the series were also previewed at the 2019 Toronto International Film Festival.

In all this though many comments under the trailer and even on other social media caught my eye, specifically those commenting on how they would not be using the platform,

afraid that it was just another way for Facebook to invade their privacy and steal more of their data.

Looks a bit desperate to me. pic.twitter.com/1jDw2wOpOo 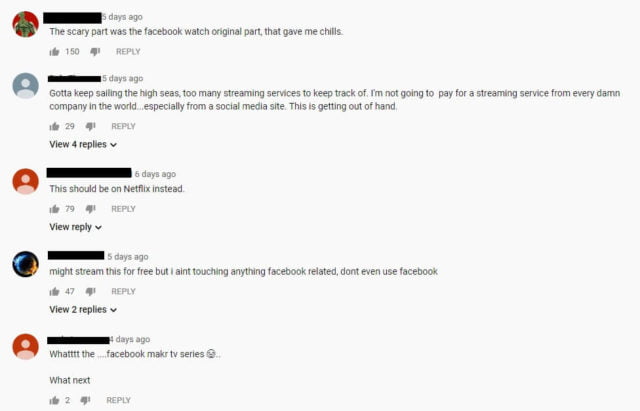 Read More: Interning At Facebook Could Make You 8000 US Dollars

Why Is No One Talking About It?

To be honest, can’t really comment on how secure the service is especially because you need a Facebook account to even use it in the first place.

However, the general consensus from the comments above and even a few acquaintances having displayed their wariness with using anything more of Facebook, is certainly that Facebook has become notorious for misusing their users’ data.

And now that people know of it all, they are even more reluctant to share any more information with Facebook or even contribute towards the success of its projects.

Another thing I’ve noticed in all this is that unlike Netflix, Amazon Prime and such, no one really seems to be talking about Facebook Watch.

Almost 90% of them were just promotional posts by verified pages who were posting news of their show being on the service.

Considering the numbers that Facebook is boasting of for their OTT platform, I would have assumed that it would have tons of people talking about it.

But one thing is clear though: that there is a very clear distrust of Facebook and its projects even if people might be liking the content overall.

Would you use Facebook Watch? Let us know in the comments below.