The pro-Kannada group called Rakshana Vedike Yuva Sene and led by their youth wing President R Harish have been taking to the streets, holding a press conference announcing their protest and threatening to do a “Padmaavat-like” protest if their demands are not met.

The poster of the film was released back in May with Sunny Leone playing the character of a brave Queen. Veermahadevi is directed by VC Vadivudaiyan and is a big budget movie at almost Rs 100 crores.

The movie will be multi-lingual, releasing in 5 different languages being, Hindi, Telugu, Kannada, Tamil and Malayalam. 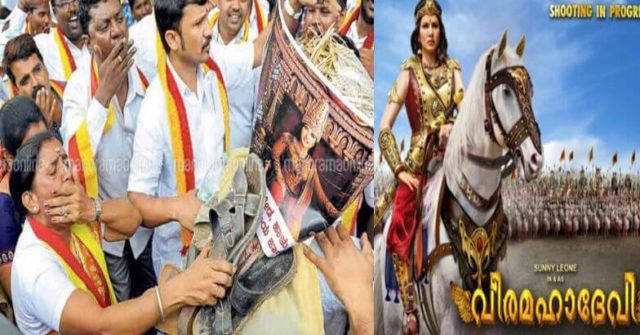 What Is The Protest About?

The protests started on Monday with people burning and tearing posters, slapping it with shoes and chappals, burning effigy of Leone with the poster as the face and even some of the youth cutting their hands with blades to “make people recognise” that they are not just playing around.

While the makers of the film have not yet revealed whether the character in the movie is truly based on a real character, reports state that as per activists Veeramadevi had a hand in building a lot of temples in the present Karnataka, and thus religious sentiments could be hurt if her character is played by someone like Sunny Leone. 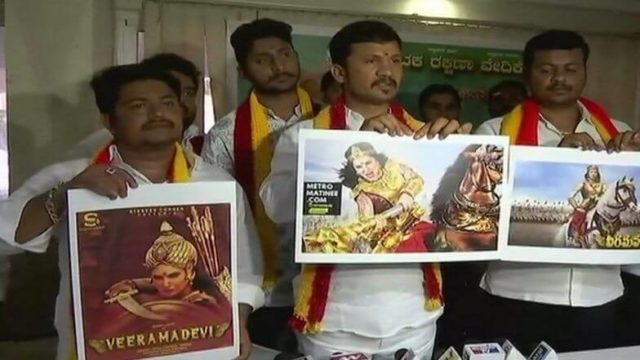 Read More: Sikh Committee Wants Sunny Leone To Apologise For Using ‘Kaur’ (Which Is Her Real Surname) In Her Own Biopic Web Series!

In a statement to Deccan Herald, the President also commented that, “We will not let this happen. This is also disrespect to the (Chola) dynasty which built several Hindu temples in Karnataka and its our duty to ensure their image is not damaged. If the movie is not banned, we will not allow Sunny to enter our Garden city.”

Harish further said that, “We are not against anything else, we just want her to quit this movie. Else, we will also have to protest like people in Rajasthan did against the movie Padmaavat.”

Not only that, but protestors are also planning to disrupt a performance of Leone that is being held in Bengaluru on 3rd November 2018.

Harish said in regards to this that, “We have bought at least 230 tickets for the performance, and we will disrupt it if she doesn’t stay away from the movie.”

On social media, this has gained a lot of traction, with many opposing such senseless protests for a mere movie.

And in Karnataka protests continue over Sunny Leone acting in ‘Veeramahadevi’ which this group says will 'hurt our culture'. How cutting themselves up and shedding blood is going to promote 'our culture' is a mysterious matter. pic.twitter.com/Jn6sDRiCpu

Bengaluru: Members of Karave Yuva Sene, the youth wing of pro-Kannada outfit Karnataka Rakshana Vedike (KRV), today tore the posters of 'Veeramahadevi' as a mark of protest against the presence of actress Sunny Leone as the lead role in the movie. #Karnataka pic.twitter.com/gqgWvRIKzO

What are your thoughts? Tell us in comments below. Do you agree with this kind of blackmail each time by different groups?

Who Was Behind The Padmaavat Protests? 4 Major Conspiracies (Video)

Bhansali Does Not Glorify Jauhar, Sati Or Suicide In His Movie Padmaavat