As the feminist wave is creating it’s effect and more and more women are opening up about sexual abuse, even those related to the influential industries aren’t untouched by it.

After the case where actress Tanushree Dutta accused actor Nana Patekar of sexual abuse, AIB’s Utsav Chakraborty is being framed on social media by women saying that he sexually harassed them. 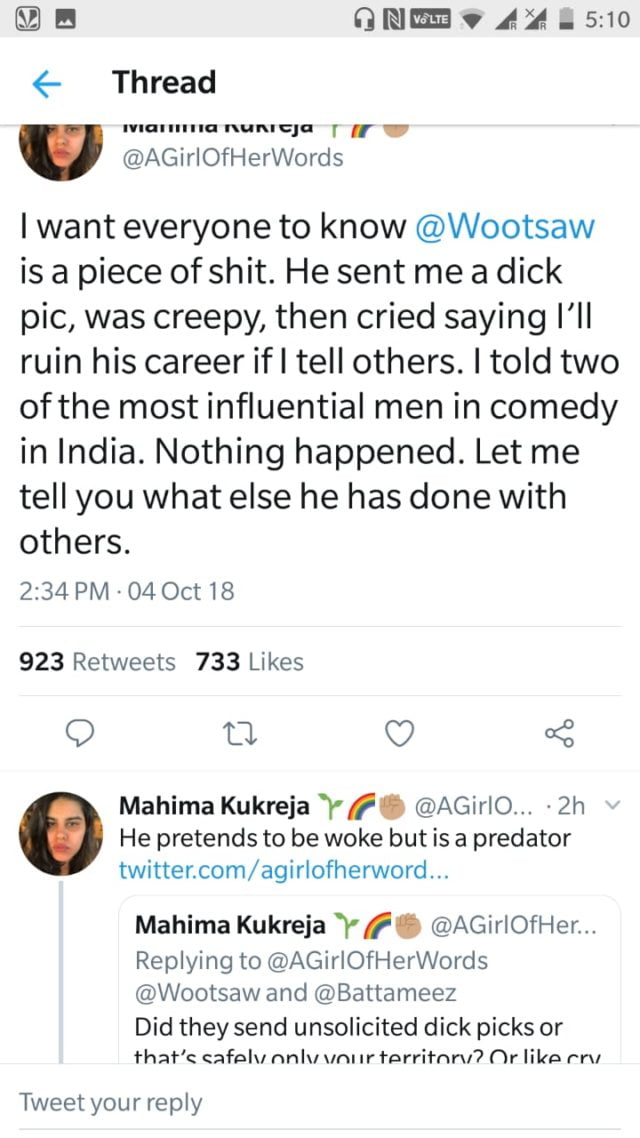 With yet another controversy being linked to AIB, let’s see what exactly the fuss is all about.

Today, a girl over the Internet accused comedian Utsav Chakraborty of sexually harassing her. She tweeted, tagging Utsav, saying that Utsav had sent her dick pictures and when she retaliated by saying that she would report the matter, he cried to her saying that such accusations would ruin his career.

She then resorted to complain to certain influential people in the comedy industry but when she was left unheard, she reached out through Twitter to make herself heard. 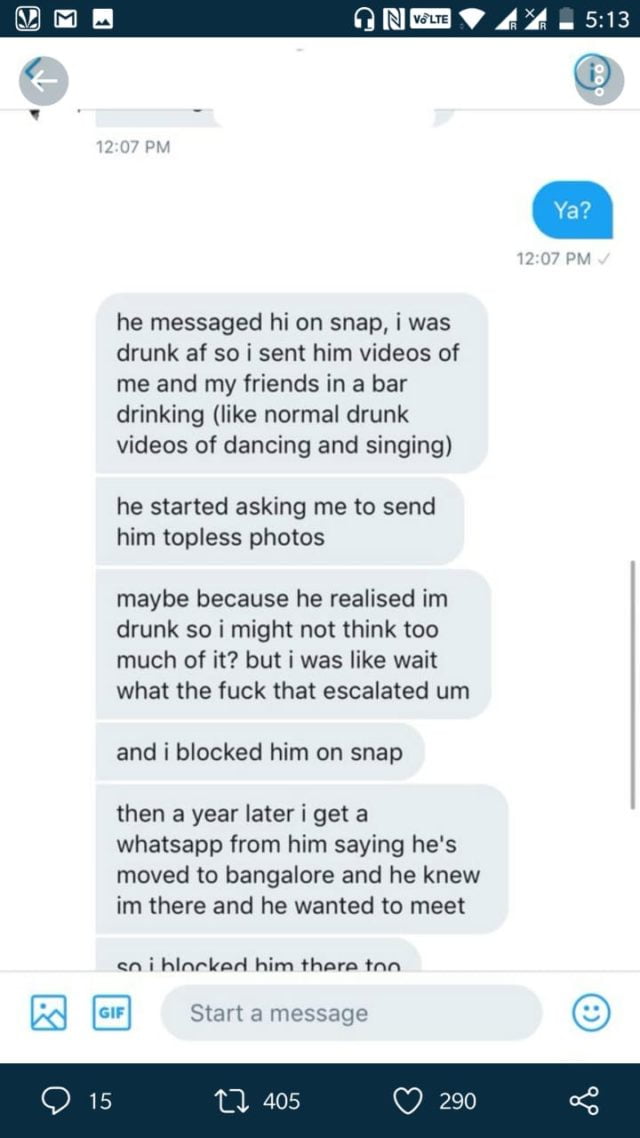 Soon it became a trending issue whereby people, especially girls, not only voiced their opinion against such abuse but some also opened up saying that they were harassed in a similar fashion.

One of the girls alleged that Utsav contacted her on Snapchat and when she replied with some of her drunk videos, he asked for her top less pictures to which she did not comply. 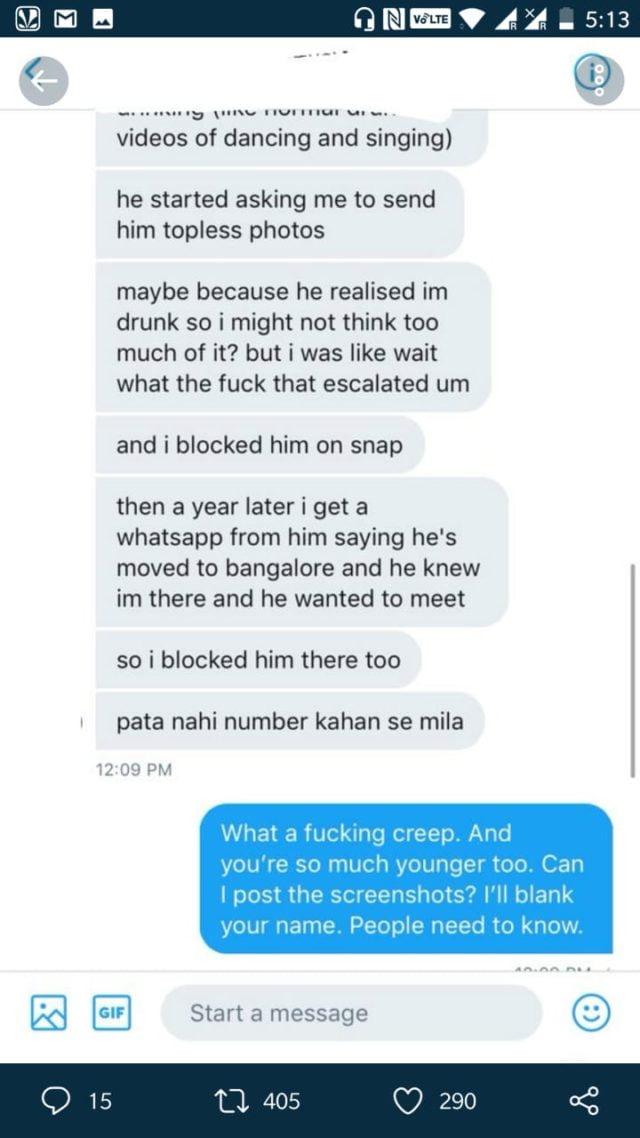 She added that a year later, he somehow got her number and messaged her that he has moved to Bangalore and he knew she was there. He allegedly said, according to some screenshots of the chat that he wanted to meet the girl as well after which she blocked him.

It must be noted that the girl who made all these allegations is much younger than Utsav and is a minor. Thus, netizens are calling him a pedophile.

Read Also: Miranda Students Not Happy With Insensitive Promotion Of The Movie “AndhaDhun” In Their College

WHAT DOES AIB SAY

AIB, through an official statement, has condemned the said misbehavior of the YouTuber saying that the pattern of behavior described on the social media platform is unacceptable.

They also apologized for extending a safe work environment to people like Utsav who in turn put female security under threat. As an immediate action, they delisted every single video of Utsav from their channel.

But netizens do not seem to be satisfied by this statement. 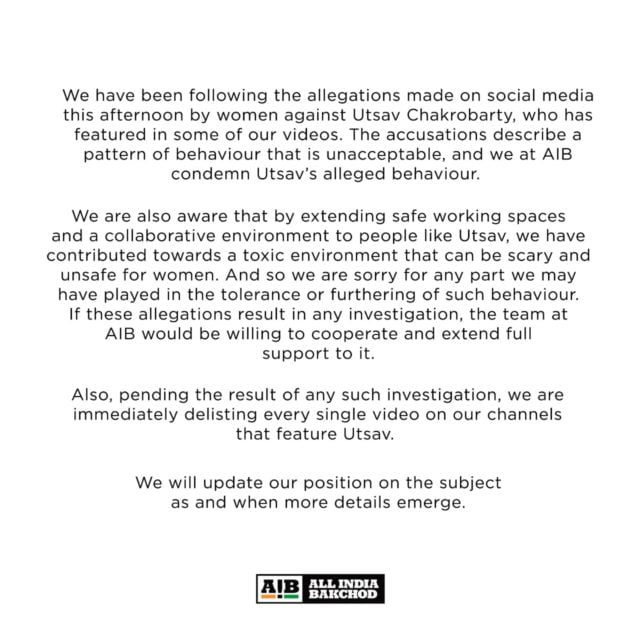 Twitter was flooded with tweets condemning the irresponsible behavior of AIB which showed its insensitive side towards the issue by saying that they would wait for “investigation” to undertake a constructive action.

It is also being argued now that these comedy videos are scrap which are made by womanisers whereby they pass sexual comments to make people laugh.

IS IT ANYHOW RELATED TO THE TVF CONTROVERSY

Earlier this year, in the month of March, another comedian and YouTuber was under accusations of being a sexual predator.

Arunabh Kumar, CEO of TVF,  was accused of molestation. Over 9 women accused Arunabh of professional misconduct and sexual harassment.

These incidents of sexual abuse by influential people are in social purview after multiple women are coming out openly with accusations of sexual misconduct against such men.

This is probably the dark side of this industry which was less talked about before, but now needs to be considered.