Advaita Awards 2018 is a salute to emerging Women Entrepreneurs who have made a mark in their field and inspire the next generation.

Women entrepreneurs are constantly stirring up a positive revolution of sorts. They have become an embodiment of women empowerment through their hard work and perseverance.

ADVAITA – Women Entrepreneur Awards has been conceptualised by SMBConnect to honour women trailblazers in recognition of their entrepreneurial success and contribution to state’s growth.

Advaita recognizes the self-belief of women and salute their spirit of being resilient, persistent, passionate and strong.

Held on 25th October 2018, at the Hotel Hilton, in Jaipur, Rajasthan the event is a means to acknowledge and award the female entrepreneurs of India.

SMBConnect has collaborated with Federation of Rajasthan Trade and Industry (FORTI), the largest trade and industry chamber of Rajasthan, to organise ADVAITA Awards in the state of Rajasthan.

The Advaita Awards will be organized in different states, starting with Rajasthan. So basically the goal of the team is awarding women entrepreneurs across different states so that they can be recognised and appreciated better.

The Advaita team has collaborated with FORTI, the largest trade body of Rajasthan, to ensure that even those marginalised women entrepreneurs who are otherwise inaccessible are aware of this event through conventional mediums such as social media. 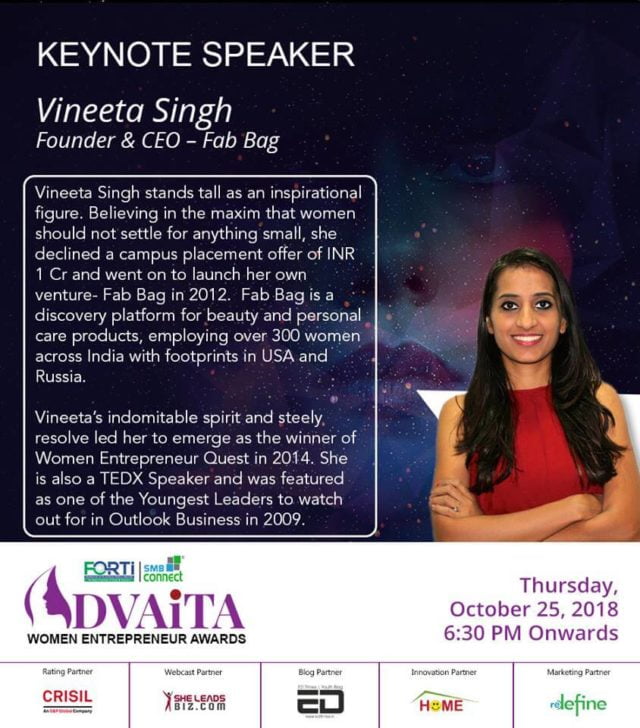 The reason to start with Rajasthan first was because of the potential women artisans and business owners hold there and the fact that their contribution to the Indian economy is still unacknowledged and unrecognised.

The team behind this event have engineered award categories in such a manner that includes every sector of the Indian economy to ensure industry-wide penetration.

The event will also be providing free iCheck by CRISIL to all the nominees of Advaita awards so as to establish and reinforce the credibility of their businesses.

Along with all this, the organisers are also giving 6-month free social media promotion to all the winners of the Advaita awards to enable them to establish their digital footprint.

The eventual hope with this event is that these awards will help gain extensive media coverage for the female entrepreneurs of India, and give them a platform to meet with eminent FORTI members and to network with fellow women entrepreneurs.

SMBConnect and FORTI salute the emerging Indian women entrepreneurs who are creating and executing scalable solutions with grounded reality and proving themselves in business across an array of industries and services sector.