Fairytales often mention the place under a bridge being the home of various monsters. Trolls, ogres and more are said to come from there with the place generally being considered not suitable for good people.

In reality the place is said to be unsafe due to dangerous people occupying it and no self-respecting person would ever go under a bridge.

However, did you ever think that the very place that has such a bad reputation in both stories and reality could be a place where poor kids get free education?

In a very inspiring move, Rajesh Kumar, a common shopkeeper decided to open a free school under a Delhi metro bridge.

It has now grown to educate as many as 300 poor and under-privileged kids who come from nearby slum areas. 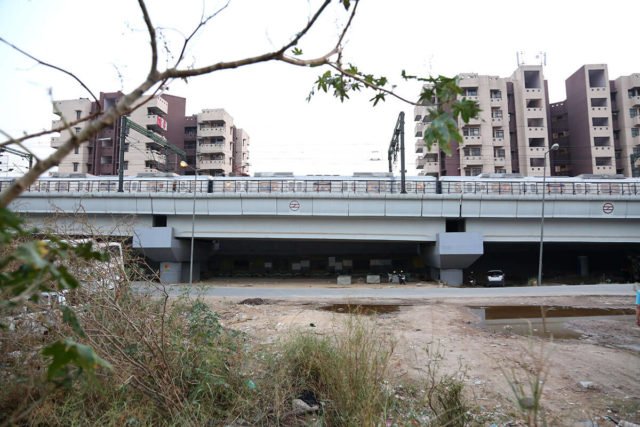 What Is This School Under The Bridge?

Aptly called the “Free School: Under the Bridge”, the institute is located under a Delhi Metro bridge near the Akshardham and Yamuna bank region and takes students from 3rd to 8th class.

The school with around 300 students, usually from the many slums that exist near the banks of the river, has been there for 13 years now. It has managed to sustain itself without any external support from NGOs or the government.

Majority of the students are enrolled in government or municipal schools, with the free school providing additional and more focused education. Kumar revealed how 3 students from his school had even gotten admission in the graduation courses at the Indira Gandhi Open University. 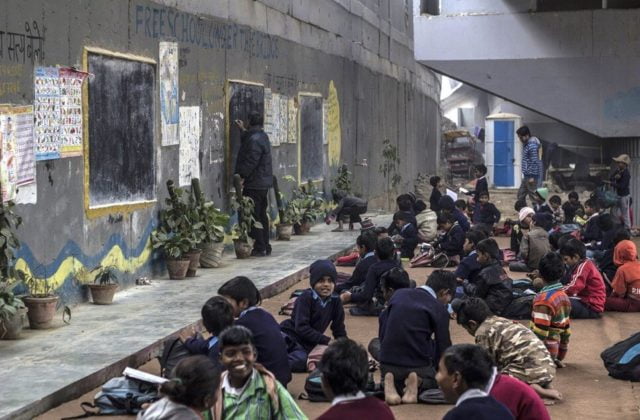 Not just that, but as per a report in 2017, around 10 students of this school did their Diploma in Pharmacy from Department of Training and Technical Education of Delhi government.

The bridge provides a roof over the students while the wall of the Metro station acts as a good place to create makeshift blackboards. The students sit on carpets that protect them from the rough ground.

The wall has now been further beautified with paintings and colourful murals that make the place quite cheerful. 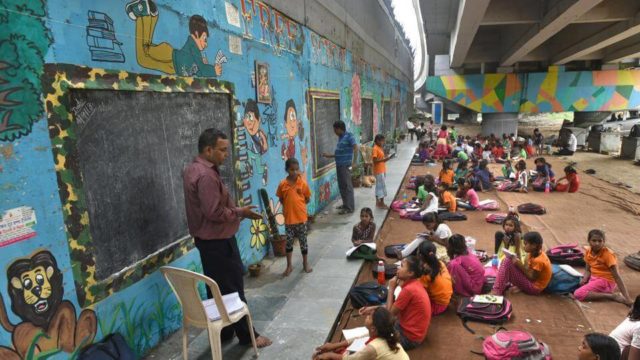 There are around 7 teachers besides Rajesh Kumar who volunteer without any payment. Students from the ages of 4 to 14 years old are taught subjects like English, mathematics, Hindi, science, geography and history.

Read More: Why Aren’t Students Being Taught How To File An FIR Or Get A Voter ID In Indian Schools?

How Did Rajesh Do It?

Rajesh Kumar comes from the Hathras district in Uttar Pradesh where he runs a grocery shop. In 2006 he came across 2 child beggars and wondered what could he do to help them.

Dismissing short-term respite like toffee or clothes he decided to offer them education which would help them build a better life. 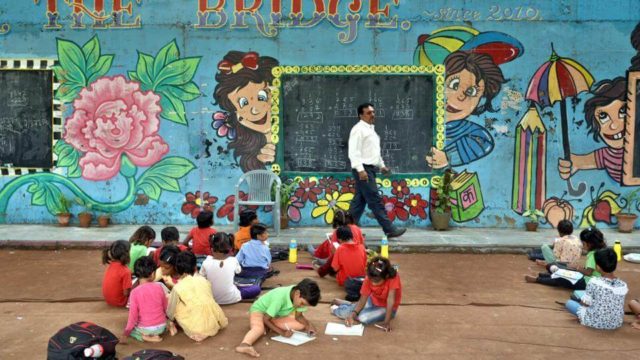 He then co-founded the school with Laxmi Chandra and Shyam Mathur.

The idea of education was even closer to his heart since he himself had to drop out of college while doing his B.Sc due to the poor financial situation of his family.

Kumar has often commented on how in the beginning it was difficult to get students to come to the school. Parents were reluctant, especially with girls, to send them to a school and lose out on extra income.

However, that mentality slowly changed and now there are about 20 volunteers teaching at the school. Students are officially registered in a book with their details and photograph.

We laud your efforts, guys! Not all heroes wear capes, they say.